Film Review with Robert Mann – The Princess and the Frog 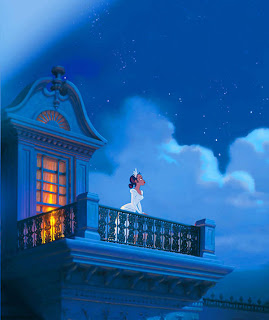 There is a certain irony that comes with the release of The Princess and the Frog. A film that has come into being due to Walt Disney Animation Studios taking a complete u-turn on its decision to stop doing traditional 2D animated films in favour of computer animated features, which itself occurred due to Pixar founder John Lasseter being made the head of Disney animation in its entirety. The irony is of course that the very man responsible for Disney’s return to their traditional style of animated filmmaking – their next 2D feature, Rapunzel, is currently scheduled for release this December – is the same man who once told Disney heads that computer animation was the way of the future and got fired for it, only to come back with a vengeance when he turned Pixar into a massive success, one of the things that paved the way for computer animation to become dominant and 2D hand drawn animation to be cast aside. Now, that mouthful is out of the way, The Princess and the Frog is far more than just a return to 2D hand drawn animated filmmaking, it is also a return to the traditional fairy tale style of classic Disney movies – something which hasn’t been seen for a long time, even prior to Disney’s turn to computer animation – although there is a bit of a twist, in that this film’s princess is the first ever princess in a Disney movie to be African American and a fresh setting in the form of 1912 New Orleans. Loosely based on E.D. Barker’s novel The Frog Princess, which itself was inspired by the Brothers Grimm fairytale The Frog Prince, this is a film that has the potential to bring 2D animation back into the public consciousness in a big way but will today’s kids, many of whom who have probably never seen an animated feature such as this, be interested or will it get ignored in favour of some less worthy family flick?

When Prince Naveen of Maldonia (voiced by Bruno Campos) comes to New Orleans, a deal with voodoo villain Dr Facilier (voiced by Keith David) goes bad and the once-suave royal is turned into a frog. His attempts to become human again lead him to a kiss on the lips from a beautiful girl named Tiana (voiced by Anika Noni Rose). However, things take an unexpected turn as, rather than the Prince becoming human again, Tiana is also transformed into a frog, leading them both on a series of escapades through the mystical bayous of Louisiana to the banks of the mighty Mississippi river and back to New Orleans in time for Mardi Gras. With the help of 197-year-old voodoo priestess Mama Odie (voiced by Jenifer Lewis), a love-sick Cajun firefly called Ray (voiced by Jim Cummings) and Louis (voiced by Michael-Leon Wooley), a trumpet-playing alligator, Tiana and her prince have the romantic adventure of a lifetime.

When Walt Disney Animation Studios stopped producing traditional 2D hand drawn animation back in 2004, they went out with a whimper, their last 2D animated feature being the mediocre Home on the Range. Now, six years later, they have returned to their classic animation style with a bang. A huge improvement not only on their last 2D film but several others before it, The Princess and the Frog can attribute some of its success to the fact that it is not only a return to 2D animation but also to Disney’s roots. For starters, this is a traditional style fairy tale (albeit one with a twist – who would ever have expect to see voodoo in a Disney movie? – and one that has a very different setting than past Disney films). Secondly, not only is the film a return to 2D animation but also a return to classic Disney 2D animation, with the film almost looking as though it could have been made back in Disney’s early days. In fact, the film is distinctly old fashioned in virtually every respect with everything – the superbly written, composed and performed musical numbers; the clean, simple humour; the good messages; and the cute, lovable characters – being such that could be right out of a classic film from the Disney vault. Actually, it could very easily pass as a classic Disney animated feature. Certainly, any older viewers familiar with the classic Disney cartoons will be taken aback by it all. Even for those who have never seen an animated feature such as this – many kids probably won’t have – it will be hard not to be taken in. The animation is truly beautiful with adorably realized animal characters a plenty and 1912 New Orleans being lovingly and authentically recreated. The story is brilliant too and is very well told, perfectly capturing the innocence of old Disney movies. The music is also fantastic, injecting Jazz and Cajun styles into the classic Disney mould to create a soundtrack that is lively and upbeat and aided by terrific vocal performances. And the voice cast is also superb, every actor capturing the essence of their character, the parts clearly being given to the people best suited for them rather than just to big name stars – although there a few big names with John Goodman, Terrence Howard and Oprah Winfrey all contributing. All in all, The Princess and the Frog successfully makes what was once old seem new again and while I suspect that not of today’s kids will fully appreciate it – it will likely appeal more to girls than boys for instance – it should nonetheless keep many younger viewers quite happy while also serving as a good demonstration of some of the artistic elements that have been lost in the transition from 2D to 3D animation.

The Princess and the Frog ****