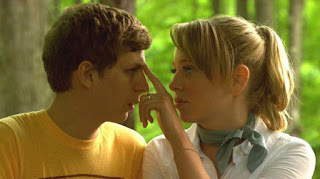 When he first appeared on the big screen in 2007’s Superbad, Michael Cera was hailed as one of the big players in a new generation of comic actors. Yet, in the year since that film, there has been some backlash against the star, with many saying that he essentially plays the same role in every film. Truth be told, he pretty much does – even if it is a role he plays well – but in his latest film, Youth in Revolt we finally get to see a different side to the star, one that shows he is capable of being far more than just the ‘sensitive guy’. Based on the 1993 epistolary novel Youth in Revolt: The Journals of Nick Twisp by C.D. Payne, the film is also something of a departure for Cera in other ways too as this is a far from conventional teenage comedy, in many ways a film that is probably destined to receive cult status rather than mainstream popular recognition. But is the film truly deserving of cult recognition, being something that will be remembered for years to come, or do its attempts to create something a bit different from the teen mainstream result in failure?

Nick Twisp (Michael Cera) is a bright and affable but nerdish teenager who is frustrated with his life. His mother Estelle (Jean Smart) and father George (Steve Buscemi) are divorced and he has been left living with his mother, as she goes from one boyfriend to the next, her current partner being the disgusting Jerry (Zach Galifianakis), while his father lives with his young girlfriend Lacey (Ari Graynor). Nick is lonely, his only friend being the extremely depressed Lefty (Erik Knudsen) and to top it all of he is a virgin. Everything changes, however the family to take a vacation some distance away. There, Nick meets Sheeni Saunders (Portia Doubleday). It’s love at first sight for Nick and the two quickly embark on a holiday romance. However, when the time comes to leave, Nick can’t bare the thought of not being with Sheeni, and they formulate a plan that will allow them to be together – if Nick can get his father a job near where Sheeni lives and then get his mother to throw him out then they will live close enough together to continue their relationship. In order to get himself thrown out, however, Nick has to be very bad, something which he is generally is not. So, Nick decides to create a supplementary persona named Francois Dillinger – bold, contemptuous of authority and irresistible to women. And it works! But too well, as Francois begins to turn Nick’s life upside down, with Francois burning down half of Nick’s town, turning him into a wanted man. Fortunately for Nick, his mother’s new boyfriend Lance Wescott (Ray Liotta) is a cop and agrees to get him out of trouble but unfortunately Sheeni’s parents (M.Emmet Walsh and Mary Kay Place) hear about Nick’s antics and send her off to boarding school. So, Nick sets out to be with her, along the way making a new friend in the form of Vijay Joshi (Adhir Kalyan), running afoul of Sheeni’s pissed off ex boyfriend Trent Preston (Jonathan Bradford Wright), inadvertently gaining a new admirer in the form of Bernice Lynch (Jade Fusco) and enlisting the help of his former neighbour Mr. Ferguson) and Sheeni’s older brother Paul (Justin Long). Unfortunately, as much as it helps Nick in his quest to be with the girl he loves, the influence of Francois also seems to keep getting into big trouble…

Youth in Revolt is far from the average teen comedy and for this it should be applauded. The reason it manages to stand out so much is because, rather than just falling back on the same tired conventions and gags that have been seen countless times before, it really does strive to be different and, while its attempts at creating something unique aren’t wholly successful and it occasionally seems like it is trying to be different for the sake of being different rather than for any specific purpose – like with the stop motion animation segments, which are well done, but don’t serve any real purpose – the result is nonetheless a film that has plenty of positive aspects. The performances are certainly at the centre of this film and are perhaps the film’s strongest asset, with some fantastic casting decisions, including some rather against type ones, allowing for some characters who really have an edge that makes them more than just one dimensional stereotypes, as are often seen in teen comedies. Michael Cera is perfectly cast in the leading double role and gets to show two distinctly different sides to his acting ability. As Nick, he is perfectly sweet and innocent seeming, essentially playing the same character he always plays. But, as Francois, he shows us something completely different. Despite Francois essentially being the polar opposite of Nick and thus the typical role that he plays, Cera manages to not only make the role convincing but also thoroughly entertaining. He shows us that he more than a one hit wonder and that he is capable of a wider acting range and hopefully we will get to see more of this other side in the future. The interactions between Nick and Francois are particularly well done and, thanks to Cera’s performance and some very good editing, their back and forths are pretty much seamless. As Nick, Cera also shares a very sweet chemistry with co-star Portia Doubleday, who too is perfectly cast. She perfectly portrays Sheeni as sweet, innocent and wide eyed with great aspirations for her life, whilst successfully incorporating the character’s more naughty side that leads to Nick’s actions during the film. In fact, the way everyone is portrayed as less than perfect serves to make the film all the more realistic and relatable. This is particularly the case with Adhir Kalyan and Erik Knudsen as Nick’s friends. Virtually the entire cast are well chosen for their roles, in fact, with Zach Galifianakis, Steve Buscemi and Ray Liotta perhaps a bit underused but nonetheless very well selected for their characters. Other notable names among the cast are (the highly underrated) Fred Willard, Justin Long, M. Emmet Walsh and Mary Kay Place (the latter two being very against type) as well as a brief but enjoyable appearance by rising star Christa B Allen (as Karen), who also gets to show a slightly different side to her past acting roles. It isn’t just the strength of the performances that drives the film, though, but the material that they are given to worth with. The script and dialogue are very sharp, embodying a distinct offbeat style that seems quite fresh and different, while being fully relatable at the same time. While a lot of the humour is related to sex, it is mostly referential rather than explicit and presented in a very honest way, rather than being present just for cheap titillation. Obviously, the content will mean that the humour won’t be to everyone’s tastes but the humour at least isn’t in bad taste. Despite the sexual content, however, this is not on any level a sex comedy, essentially being a very sweet, if unusual love story, and the sweetness at the core of the story means that any crudeness that may be present is forgivable. So, overall, Youth in Revolt is very different teen comedy and, as such, it will likely not be fully appreciated or understood. Its attempts to be different may not be entirely successful but it still has a surreal feel that makes it quite original and well worth checking out if you are tired of seeing by the numbers teen comedies.