The Best Of Donnie Yen 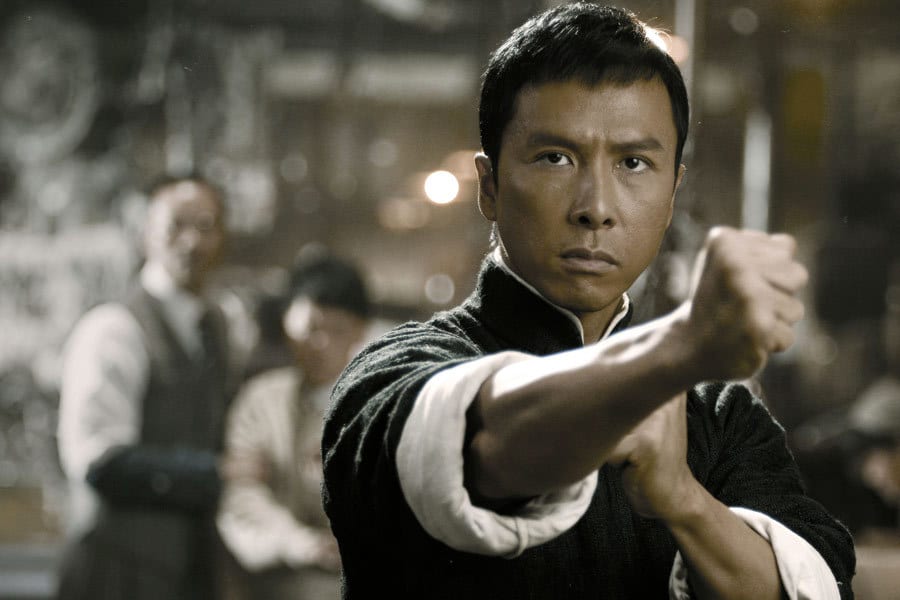 Following the announcement that Kung Fu legend Donnie Yen was taking his latest film, KUNG FU KILLER,  to last year’s London Film Festival, martial arts fans are keenly anticipating the wider release of the martial arts saga which land at cinemas on February 20th and home entertainment platforms on February 23rd. This feature takes a look at Donnie’s best performances to date, and will go some way to showing why he is one of the most revered martial artists in the world.

In KUNG FU KILLER, Yen stars as Hahou, a former martial arts instructor imprisoned after accidentally killing an opponent. When a vicious killer (Wang Baoqiang, A Touch Of Sin) starts targeting martial arts masters, though, Hahou offers to help the police capture him in return for his freedom. Also starring Michelle Bai and Charlie Young, KUNG FU KILLER is directed by Teddy Chan (star of Infernal Affairs 2) but notably also features key action scenes directed by the legendary Yen –  a real draw to martial arts fans and a contributing element to one of the kung fu blockbusters of the year.

Ip Man is a Hong Kong based semi biographical martial arts film based on the life of Yip Man, the man considered to be the Grandmaster of Wing Chun Kung Fu and the teacher of Bruce Lee. Ip, played by Yen, has an amazing wife, plenty of money, the most beautiful house in town, and a blossoming martial arts academy. But when the Japanese occupy his hometown of Foshan during the Sino-Japan war (1937), Ip is forced into hard labor and brutal sparring matches for the enemy”s amusement. Ip decides to take matters into his own hands, challenging the Japanese general to a grueling public fight. This is arguably the most impressive performance  of Yen’s career.

Flash Point, the second of Yen’s many collaborations with director Wilson Yip, is a raucous thriller about a loose-cannon cop on the trail of three drug-dealing brothers. Archer (Lui Leung Wai), Tony (Collin Chou), and Tiger (Xing Yu) are three drug online casino dealers who supply the product for much of the local drug trade, and Jun (Yen) is determined to take them down at all costs, using his undercover partner Wilson (Louis Koo), a seasoned veteran capable of infiltrating the gang and gaining their trust.

In Special ID, Yen plays Zilong “Dragon” Chen, an undercover cop deep inside China”s most ruthless crime syndicate. The boss, Xiong (Collin Chou) swears to find and kill every government infiltrator without mercy. Fearing he will be the next to be weeded out and desperate to protect his family, Chen risks everything to take down the organisation and reclaim his identity.

Four years after scoring a box-office gold with Blade (1998), Wesley Snipes returned to portray the Marvel Comics character again in this sequel that teamed him with Mexican horror director Guillermo del Toro. A half-vampire, half-human hybrid, Blade (Snipes) is a merciless vampire hunter bent on destroying the bloodsuckers that feed on humanity. Donnie Yen features as ‘Snowman’, the quiet  swords specialist of the Bloodpack, alongside co-stars Ron Perlman, Leonor Varela and Matt Schulze.

East and West team up to take on bad guys in the British Empire in this sequel to the action comedy hit Shanghai Noon. Chon Wang (Jackie Chan), once an Imperial Guard in China, is now the Sheriff of Carson City, Nevada, while his onetime cohort, former train robber Roy O”Bannon (Owen Wilson), scrapes together a living writing dime novels based on his adventures and waiting tables in New York City. However, when Wang learns that his father was killed by bandits who broke into the Emperor”s palace and stole the Imperial Seal, he”s determined to bring the criminals to justice. Donnie Yen plays Wu Chan, the bastard son of the Chinese Emperor”s father, who needs the Imperial Seal as part of his plan to win control of the nation.

Martial arts power-duo Yip and Yen combine yet again when Ip Man returned to the big screen in 2010. International star Donnie Yen reprised his iconic role as the real-life kung fu grandmaster Ip Man in this martial arts spectacular. After escaping the Japanese occupation of his hometown of Foshan in China, Ip Man and his family have arrived in Hong Kong, which is under the iron fist of British colonial rule. Ip wants to support his family by opening up a martial arts academy to teach his unique Wing Chun style. But a corrupt cabal of Hong Kong martial arts masters, led by Hung Chun-nam (Sammo Hung), refuses to allow Ip to teach until he proves himself – and prove himself he does. In an intense series of fights against the masters a dazzling variety of martial arts styles are displayed, culminating in a final battle between Ip and Hung atop a rickety table.