The Simpsons: 25 Years On The Simpsons first episode premiered 25 years ago on 17th of December 1989 with the episode Simpsons Roasting on an Open Fire.

25 years on and The Simpsons is now the longest-running animated comedy. 26 seasons, 1 movie and enough merchandise to fill the Springfield Gorge – the shows still going strong.

The show focuses on the eponymous family in the town of Springfield in an unnamed U.S. state.The head of the Simpson family, Homer, is not a typical family man. A nuclear-plant employee, he does his best to lead his family but often finds that they are leading him. The episode features a mix of traditional animation and computer animation. In the episode, Homer wakes up in an alternate reality where everyone and everything is made of Lego bricks, and he must figure his way out before he gets stuck in the plastic world forever.

In the episode, American singer-songwriter Lady Gaga makes a visit to Springfield, where all of its residents are in a state of depression. Main character Lisa Simpson is arguably the most depressed person in the city, prompting Gaga to go out of her way to teach Lisa the meaning of happiness which includes a music number or 2. The only two-part episode to date. Part One is the twenty-fifth and final episode of the 6th season aired May 21, 1995. Part Two is the season premiere of the 7th season aired on September 17, 1995.

Springfield Elementary School strikes oil, but Mr. Burns steals it and at the same time brings misery to many of Springfield’s citizens. Part One has a cliffhanger ending where Mr. Burns is shot by an unidentified assailant. In Part Two, Springfield’s police try to find the culprit, with their main suspects being Waylon Smithers and Homer Simpson. The episode does conclude that Maggie shot Mr Burns.

Cape Feare features the return of guest star Kelsey Grammer as Sideshow Bob, who tries to kill Bart Simpson after getting out of jail. “Cape Feare” is a spoof of the 1962 film Cape Fear and its 1991 remake, and alludes to other horror films such as Psycho & Friday the 13th. 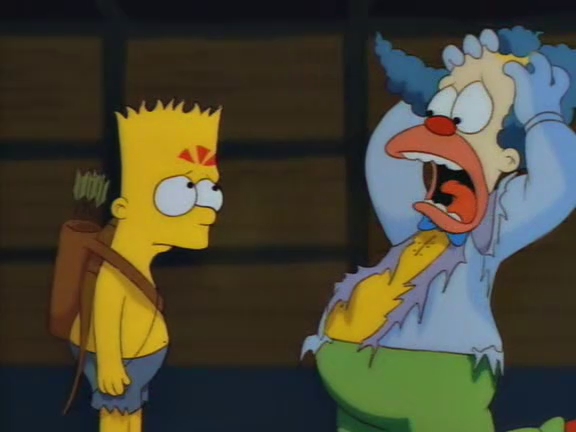 During summer vacation, the children of Springfield attend Kamp Krusty, a summer camp named after Krusty the Clown.

The camp is extremely unpleasant, leading to the campers rebelling against the camp director.