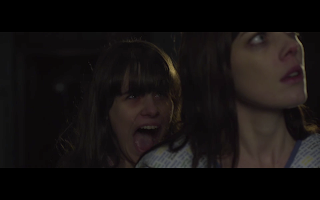 Louisa Fielden’s follow up to her impressive little short Mr. Lewis treads on similar territory in so much as its a twisty narrative where the protagonist seems to exist in multiple realities at the same time and it’s up to the audience to figure out which – if any – are genuine. It also shares an actress in the shape of Natalie Loader, here she plays a girl cooped up in a psychiatric hospital meeting with her doctor about her narcolepsy. As the meeting continues she falls into an unexpected slumber where she’s stalked in her dream by a mute, menacing girl around crumbly hospital corridors.

Fielden has assembled a fine assortment around her, contributing well in terms of cinematography, set dressing, make-up, music and even title design, but unfortunately the film stumbles in terms of its narrative. Ultimately it feels like a clipping from a larger piece, there are too many ideas rattling around inside the film’s barely ten minute running time and the lack of real resolution is less ambiguous and, instead, disappointing. Very quickly the dream falls into the wobbly cliche of spooky hospital horror with the ‘evil girl’ barely registering any sense of threat or even, in a potential David Lynch nod, creepy weirdness during a subtitled exchange.

Atmospherically the film does reasonably well, some shots are particularly lovely and the film establishes a strong ambience and sense of place excellently. This serves to render this more of an experiment than an accomplishment, but the film itself flits by so hastily that it’s difficult to really judge it too much one way or another. If anything this feels like an extended preview of a larger concept, and perhaps that’s the greatest compliment I can pay it, that I would be interested to spend more time in this world and get to know a little bit more about the characters and envelop myself deeper into the situation and – hopefully – given a padded running time, Fielden could develop the bizarre and the spooky to an extent that it can really rattle the viewer. Mr. Lewis worked because it used a very simplistic three act narrative to tell a neat and nutty tale; trying to pull off a psychologically complex and scary thriller within such a short space of time is a huge task and one that this film doesn’t quite rise to.

Regardless the talent involved here, in every quarter, are ones to watch and it is no stretch of the imagination to expect Fielden’s name book-ending a cinematic release in the not too distant future.