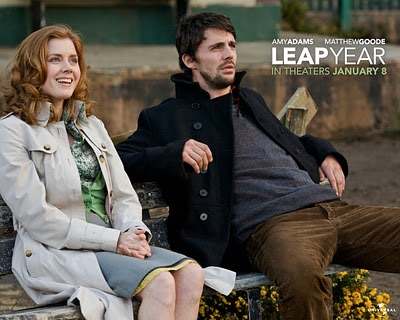 The Hollywood romantic comedy is quite an amazing thing really. Despite there having been so many romantic comedies churned out over the years, so many that it seems more and more difficult to make a truly original romcom, there never seems to be a lack of high concepts around which to base romantic comedies, even if filmmakers often fail to make anything original out of potentially fresh and promising ideas as has happened quite a few times in the past year. Now, we have yet another high concept romcom in the form of Leap Year, albeit one with considerably more promise than mediocre 2009 efforts such as The Proposal and The Ugly Truth, even boasting a better trailer than either of them. It’s pretty much a given that Leap Year isn’t a film that takes the leap at something particularly different – despite the high concept it is still romcom business as usual – but does the film at least manage to be both funny and more importantly romantic – things that have been sorely lacking in some of the other romcoms of the past year?

Uptight Anna (Amy Adams) is desperate for boyfriend Jeremy (Adam Scott) to propose at a romantic dinner on their fourth anniversary. When he doesn’t, she decides to take matters into her own hands and take advantage of Leap Day, an Irish tradition that allows women to propose to men on February 29th. Following Jeremy to Dublin, Anna intends to get down on one knee herself. But bad weather forces her flight to land elsewhere, leaving Anna stranded a long way from her destination. Alone in a strange land, she enlists the help of handsome but rude innkeeper Declan (Matthew Goode) to get her to Dublin. As Anna and Declan trundle and bicker their way through the rural backwaters of the Emerald Isle, they discover that the rocky road of true love can lead to some very unexpected places.

As is the case with most Hollywood made romantic comedies, Leap Year is a film that you know what to expect from just by seeing the trailer – or perhaps even without seeing the trailer, come to think of it. For starters, the film’s representations of another country, in this case Ireland, are pure Hollywood, conforming to classic stereotypes of what Ireland and its people are like, ignorant of the reality. Virtually all the Irish characters are portrayed stereotypical, although it could also be argued that a few of the American ones are too. So, it is fair to assume that there will likely be moviegoers in Ireland who won’t be particularly impressed by this film. At the very least though the country does provide some very beautiful locations for the events to take place in, so the film certainly looks good. Additionally, the story is wholly predictable, offering no surprises whatsoever, it being glaringly obvious from the start who Anna will actually end up with. This doesn’t prove too much of a failing, however, as the film proves to be very sweet, charming and entertaining. Unlike several romcoms from the past year, it also delivers as much in the romance department as it does as a comedy, the film being very romantic with romance never being sidelined for lame gags and the humour actually being pretty funny, if not particularly memorable and compltely unsophisticated. What really makes the film work is its stars Amy Adams and Matthew Goode who completely carry the film. Adams is as delightful and lovely as ever while Goode makes for a very charming and charismatic male lead and the two share a very sweet and actually quite believable chemistry on-screen, something that seems to be lacking (perhaps deliberately) between Adams and Adam Scott. The rest of the actors are rather less impressive, with John Lithgow completely wasted in a cameo role as Anna’s father who tells her about the Leap Day tradition. Overall, Leap Year is nothing special but if you want to see an undemanding romantic comedy that will leave you with a smile on your face then it may just be worth taking the leap on this one.