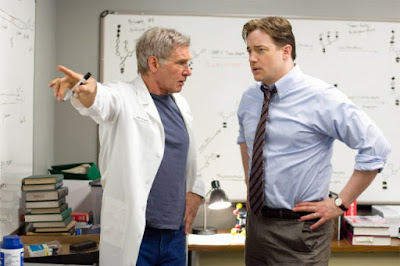 Despite all the great stories that can be created in the imagination, there is rarely anything more inspiring than a story that is completely true. For this reason, films based on or inspired by true stories almost always prove popular with moviegoers and occasionally even prove to be successful far beyond anything anyone could possibly have imagined – a la The Blind Side on its release in the states last year. So why then did Extraordinary Measures – based on the novel The Cure by Geeta Anand – flop so disastrously on its release across the pond? It seemingly has all the right ingredients – an inspirational story inspired by true life events, big name stars and by all accounts it was apparently marketed well – yet somehow it was completely overlooked by almost everyone in America. Well, perhaps it is because, unlike that aforementioned film, Extraordinary Measures anything but extraordinary.

Father of three John Crowley (Brendan Fraser) is on the way to success in corporate America. But as his career takes off, John’s two youngest children, Megan (Meredith Droeger) and Patrick (Diego Valezquez) are diagnosed with fatal illness Pompe Disease. Supported by his wife Aileen (Keri Russell), John quits his career and harnesses all his skill and determination to fight the disease. He teams up with Dr Robert Stonehill (Harrison Ford), a brilliant but unappreciated and unconventional scientist. Together they form a bio-tech company to develop a life-saving drug. In this unlikely alliance Stonehill is driven to prove his theories, while John is determined to save his children. But eventually a mutual respect develops as they take on the medical and business establishments in a fight against the system and a race against time.

Extraordinary Measures is not a bad film exactly but it is prevented from being particularly good due to the fact that is just doesn’t feel cinematic enough. When you see a film at the cinema you tend to have certain expectations and this film fails to satisfy several of these. In fact, almost everything about this film screams made for TV, with it often seeming more like a Hallmark Movie of the Week than a movie you should be paying to see at the cinema. The television look and feel is present is virtually every aspect from the camera work and the editing to the script and the music. Some camera techniques seem like they could be right out of a television medical or procedural drama, the way the film has been edited almost makes it seem like points have been allocated for advert breaks, the soundtrack has no real depth and the story is structured as though it is intended for a TV movie or a mini series, often being quite melodramatic and not really engaging enough. Additionally, it seems like a situation arises every twenty minutes or so and is quickly resolved – something that seems right out of a television drama and that has no place in a movie you see at the cinema. All this is perhaps understandable given the production company CBS Films is a division of a US television network but it doesn’t change the fact that all these things are completely out of place in a theatrical release film. It isn’t all bad, however. In spite of the flaws of the script, the story still manages to be both moving and inspirational, despite the overly melodramatic style there are still a few decent dramatic scenes and there are even a few instances of well placed humour. On top of this, the acting is excellent across the board, with perfectly intense performances from both Brendan Fraser and Harrison Ford, who are truly convincing individually and whose on-screen interactions are truly electric. The rest of the cast, which also includes Jared Harris and Alan Ruck, also lives up to the high standard. Particularly worth mentioning is Meredith Droeger who delivers a very mature and sincere performance as Megan. Overall, the fantastic acting and the few other strong points does make Extraordinary Measures a film that is worth seeing but the made for television style means that the whole package feels more ordinary than extraordinary.