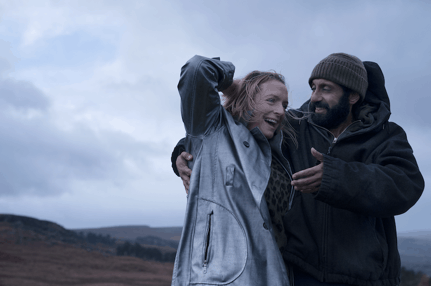 The film is a compelling contemporary British love story imbued with the intricacies of age, class and race.

AVA (Claire Rushbrook) is a respected matriarch on a predominantly white Bradford estate.  In her fifties and from an Irish-Catholic background, Ava is a devoted mother, grandmother and teaching assistant who fills her time looking after others and listening to country and folk music, masking the scars left by an abusive ex-husband.  ALI (Adeel Akhtar) is a charismatic son, brother, boss and landlord, an avid music and book lover and moon watcher.

In his mid-thirties, Ali is devoted to his family and Asian community in Bradford.  Still living with his estranged wife, he hides their separation from his family, painfully continuing the charade of marital domesticity because he still loves her.  Both lonely for different reasons, Ava and Ali find each other and sparks fly fierce, despite their own fears about intimacy and expectations of their families and communities.

Writer/director Clio Barnard has established herself as one of the UK’s most distinctive cinematic voices.  Her feature-length debutThe Arbor, a documentary about the late Bradford playwright Andrea Dunbar, received huge critical success on its release in 2010 and numerous awards.  Her sophomore feature The Selfish Giant, about two 13-year-old working-class friends in Bradford seeking their fortune, launched at Directors’ Fortnight in Cannes in 2013 and won the British Film of the Year at the London Critics Circle Film Awards along with a host of other festival awards.

Producer Tracy O’Riordan says of the film ‘It was wonderful to be back in Bradford shooting Clio’s fourth feature; a love story, based on people we have met whilst making our previous films there. Inspired by Fassbinder’s ‘Fear Eats the Soul’, ALI & AVA is a film about fear and courage, loneliness and belonging, time and love’.