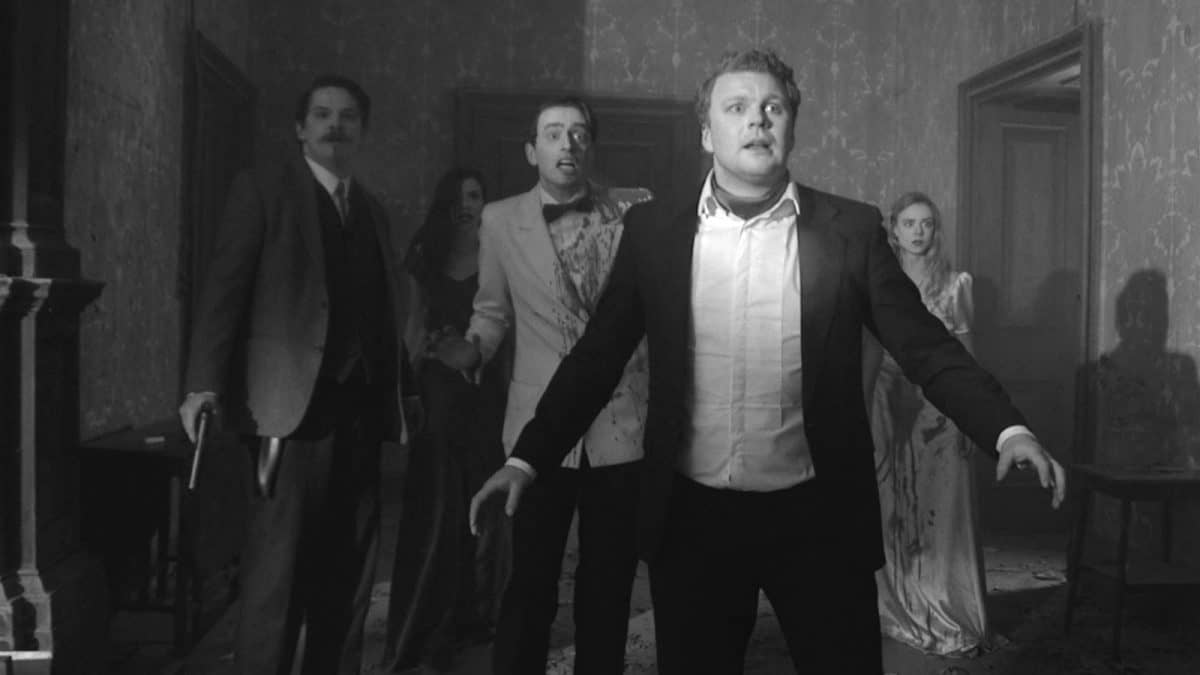 Here Comes Hell is a low budget, black and white horror movie starring Red Dwarf’s Robert Llewellyn as a rich ‘American’ (the Southern drawl often falls into English gent) who comes to England to visit his best buddy at his new country estate.

First time director Jack McHenry has shot the entire film as an ode to early Hammer Horror films, using a mixture of green screen and practical effects, often doing so effectively. Occasionally, though, missing the mark. McHenry obviously knows his classic horror – much like Tarantino uses certain camera angles and colour grading to reference his favourite films, McHenry’s use of zoom, point of view shots and freeze frame are a love letter to a by gone era.

All the actors play their part well and when the effects work, they are Evil Dead-esque. However, what lets this film down is the sound editing and the fast pace of the plot. Although, I’m somewhat wondering now if the sound mix was purposely supposed to replicate that era of film, and if the rush from seance to possession also does this.

If it was purposeful then it did certainly result in some comedic moments at times. Although this film is not quite Garth Marenghi’s Dark Place, or Dracula, Dead and Loving It, it certainly has a certain charm and an A* for effort. I’d very much like to see what this director can create on a larger budget.

ENGLISH PREMIERE – It was our critically acclaimed, crowd-pleasing Glasgow FrightFest sensation and now Jack McHenry’s astonishing feature debut comes to London. ‘Downtown Abbey’ meets THE EVIL DEAD in a pitch-perfect evocation of THE OLD DARK HOUSE style of mystery horror thriller where Agatha Christie goes Lucio Fulci in stunning Black & White. With cut-glass British accents and a dodgy American in the cocktail party mix, a sophisticated 1930s soiree at an isolated country mansion descends into carnage, gore and demonic possession as rivalries and old friendships are put to the test when a gateway to Hell opens up without warning.