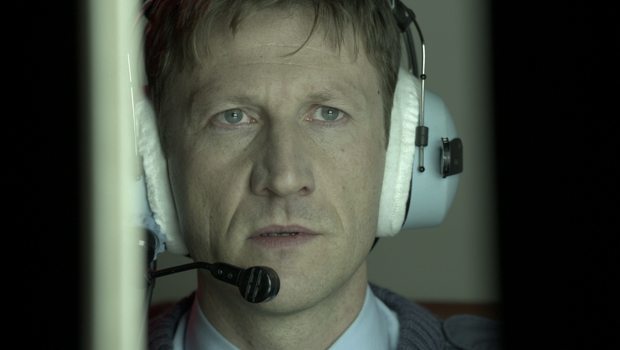 Drone Strike opens with a series of shots from a drone’s perspective. The last in the sequence depicts the shadow of the machine cast on the ground, slowly closing in on a small moving vehicle, like the shadow of an eagle hanging high above its prey. It’s a simple but effective piece of visual storytelling, at once prophetic, unsettling and indicative of the cold, clinical nature of UAVs.

The central conceit of the film is, in the words of its press release, “1 killing, 2 victims, 4000 miles” and the film hops back and forth between two protagonists throughout: a drone pilot in Lincolnshire and a labourer in the Helmand Province, Afghanistan. Both are family men, and the juxtaposition, and occasional parallels between the daily routines of each man is, again, a simple but effective device, the tension and dread slowly ratcheting up with the implicit presence of the unseen drone, hanging over everybody’s heads.

Inevitably, tragedy ensues. The wrong man is targeted and 4,000 miles away, an RAF pilot is left to contemplate the impact that the twitch of his thumb creates half the world away. It’s a beautifully-shot, beautifully-paced, beautifully-scored and compassionate piece of film-making. By choosing to focus so entirely on the mundane step-by-step of each protagonist’s day, the release of a hellfire missile as much a part of one Lincolnshire man’s day as dropping his son off at school or discussing bachelor party plans with his co-workers, the film captures just how cold and inhuman it is to remotely control such destruction.

However, the film is a little simplistic, truth be told. We don’t actually learn much about this complex issue, other than ‘drones can kill the wrong people’ and ‘Afghani people have families just like we do’, which would be a little patronising to assume that people do not already know. There no indication how drone targets are chosen, or the levels of intelligence required in doing so. This maintains the film’s sharp two-protagonist focus, but leaves it feeling a little shallow when it comes to exploring a complex issue.

Having its Lincolnshire protagonist reflect on what he’s done in the film’s closing moments is another misstep. His concern extends as far as a few thoughtful looks and a stiff drink. If the filmmaker’s wanted to actually address the protagonist’s thoughts on his own actions, more articulation is required than that to avoid seeming trite. Otherwise, having the character not harbour any concerns about his actions would have been much more powerful.

But these are relatively minor gripes for what is still an accomplished short. Scout Films have created a chilling, tense and effective little film, though one that would benefit from being a little less simple.