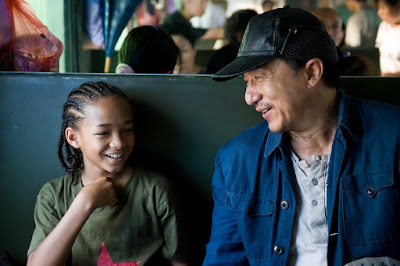 Remakes can mostly be classified into three categories. Firstly, there are the ones that are genuinely worthy, the ones that bring something new to the fold that was perhaps missing from the original and maybe even prove to be superior. Secondly, there are the ones that are only really made to cash in on the original film’s name, bringing few new ideas but having some hook that makes them at least worthwhile on some level. And, finally, there are the completely needless remakes that are made for no purpose other than to cash in on the name of the original film, both failing to provide a new spin on the original formula or provide any real hook to make them stand out. Its UK release preceded by considerable hype and impressive box office numbers in the states (it has already grossed over $170 million there), the 2010 version of The Karate Kid falls firmly into the second category. Aside from a change of setting – the California locales of the 1984 original are replaced by China – and a change of fighting style – kung fu is substituted for karate, thus rendering the film’s title somewhat inaccurate, ‘The Kung Fu Kid’ being a more accurate name – there is little about this film that is especially different to the original and certainly this could be classified as a needless remake – after all, who ever really wanted to see a remake to The Karate Kid? Yet, the star combination of Jaden Smith (he’s the son of Hollywood superstar Will Smith in case you didn’t know, his father also being a producer on this film, along with wife Jada Pinkett Smith) and Jackie Chan has clearly provided a powerful hook and this film proves to be something more than what you might expect it to be.

Twelve-year-old Dre Parker (Jaden Smith) is just a normal kid from Detroit, but then his mother (Taraji P. Henson) makes a career move that takes them both to China. Dre likes his classmate Mei Ying (Wenwen Han) but cultural differences make problems for their friendship. Even worse, Dre’s feelings make an enemy of the class bully, Cheng (Zhenwei Wang). Dre knows some karate, but Cheng’s kung fu skills quickly put ‘the karate kid’ on the floor. Dre feels alone in this strange land, but then he meets kindly maintenance man Mr Han (Jackie Chan), who is secretly a master of kung fu. As Han becomes Dre’s mentor, he teaches the young karate kid that kung fu is not just about fighting, but about self-control and adaptability. But will Dre ever learn enough to defeat the bullies?

While The Karate Kid certainly is an unnecessary remake, this is not to say that it isn’t a worthwhile one. Sure, it doesn’t bring anything particularly new to the story and the plot goes down a very predictable path but this is a film with many things to recommend it. Going not down the comedy route as you might expect but rather being a drama that happens to feature some humorous moments, there is some dramatic depth that you might not expect to find, with a few emotional scenes likely to pull on the heart strings a bit, and while comedy moments are sparse, when they do appear they prove to be very amusing. In a change of pace for Jackie Chan, this film does not feature his trademark comic fight scenes. In fact, this film is a change for the star in more ways than one, his role here being more serious than comedic, even though he does prove amusing at times. His performance here is easily his best in some time, his emotional portrayal of a man hiding a tragic secret being both convincing and heartbreaking. Chan, however, is not the star of the film. That honour goes to Jaden Smith, who shows himself to be a very capable performer, displaying genuine charisma and being quite engaging in his role. He shows real a potential as a movie star but does still have a long way to go before he displays the level of charisma and gravitas of his father. Smith also engages well with his co-stars, sharing a good master-student dynamic with Chan, a convincing a mother-son relationship with (an extremely underused) Taraji P. Henson and a very sweet chemistry with (the truly delightful) Wenwen Han. Smith also performs well in the physical elements of the film with the fight sequences showing off very good choreography and kung fu moves and Mr Han’s training techniques (“Jacket on, Jacket off”) being suitably unorthodox. Also of note is that the film’s depictions of Chinese culture are both authentic and respectful and that the Chinese locations provide some truly beautiful backdrops to the film’s events. If there is any criticism to be made of the film it is that, at 2 hour 20 minutes long, the film occasionally proves a tad too slow moving and long winded. This, however, is only a minor criticism in a film that has a sweet and inspiring story at its heart that it is hard not to be won over. Simply put, The Karate Kid is a near-perfect feel good movie where good triumphs over adversity and it is definitely a top choice to see at your cinema over the summer holidays.