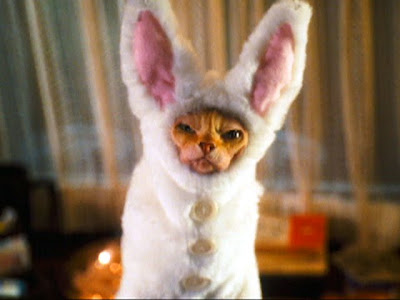 Nine years ago almost to this day, Cats & Dogs was released in cinemas and, despite being a merely passable and completely unmemorable piece of family cinema, the almost genius take (the idea behind the film, not the film itself) on the age old rivalry between cats and dogs struck a chord with moviegoers to the tune of more than $200 million in global box office takings. A certified hit, it was little surprise that a sequel was quickly greenlit. What is surprising, though, it just how long it has taken for this sequel to actually get the sequel made. Having been stuck in the depths of development hell for the best part of a decade, Cats & Dogs: The Revenge of Kitty Galore only now graces our cinema screens. The big problem is that, in the nine years since it was released, the unmemorable original film has been all but forgotten by moviegoers, those kids who enjoyed it when it was in cinemas now grown up and today’s kids likely never having even seen it. Simply put, while the box office numbers for the first film may have suggested that a sequel was viable, no one could really care less about what is a completely needless sequel that seems destined for rejection by both movie critics – that much was always a given – and the paying public – the film has already flopped at the US box office with a mediocre opening weekend of just $12 million. Even the addition of 3D doesn’t really seem likely to attract attention. And this review is unlikely to help much either.

In the age-old battle between cats and dogs, one crazed feline has taken things a paw too far. Kitty Galore (voiced by Bette Midler), formerly an agent for cat spy organisation MEOWS, has gone rogue and hatched a diabolical plan that will not only bring her canine enemies to heel, but will also take down her former kitty comrades and make the world her scratching post. Faced with this unprecedented threat, cats – represented by agent Catherine (voiced by Christina Applegate) – and dogs – represented by veteran agent Butch (voiced by Nick Nolte) and rookie agent Diggs (voiced by James Marsden) – are forced to join forces for the first time in history in an unlikely alliance to save themselves – and their humans!

The tagline for Cats & Dogs: The Revenge of Kitty Galore reads “Just like real spies…only furrier” and this is a theme that is played on quite heavily in the film. In many ways I suppose, this is kind of like a James Bond movie only with cats and dogs as the secret agents and this is evident in everything from the 007 style opening credits sequence complete with theme tune to the dastardly over-the-top plot orchestrated by the villain, not to mention the name of the villain herself – Kitty Galore a blatant reference to Pussy Galore from classic Bond movie Goldfinger – and the fact that former 007 Roger Moore lends his voice to one of the feline characters. Trying to emulate a James Bond movie, however, does not put a film in the same league as one and, while this sequel manages to lose the domestic setting of the first Cats & Dogs film it does not better it. A series of semi-enjoyable action sequences are offered up that will keep undemanding kids happy but satisfy few others, the CGI is decent but never spectacular, (if you see the 3D version) the 3D effects are pretty well done if not utilized as fully as they could be (this being a post production conversion job rather than a shot in 3D film), plot is virtually non-existent and the humour, while clearly trying to cater to older viewers – a gag involving first film baddie Mr Tinkles putting in a Hannibal Lecter style cameo appearance and another showing cats getting high on catnip are notable examples of this – generally only raise giggles rather than that out loud laughs. Much of the humour is clearly aimed at kids of course, the film offering up cat and dog puns a plenty, and the kids at least should be satisfied while accompanying merely tolerate what is essentially a wathchable but not especially likable family movie. On the acting front there is little to speak of with former Robin Chris O’Donnell (playing Diggs’ human owner who is searching for him) hardly being on screen for much of the duration and 30 Rock star Jack McBrayer (as Kitty Galore’s loving but dim-witted owner) being completely wasted. The voice cast fares better – all the cast members doing a pretty good job – but the surprisingly impressive list of star names – in addition to those aforementioned, Katt Williams, Neil Patrick Harris, Sean Hayes, Wallace Shawn, Joe Pantoliano and Michael Clarke Duncan (notice that while many of the canine characters from the first film appear in this sequel, the only returning voices are Joe Pantoliano and Sean Hayes, the latter as Mr Tinkles) – still adds little to the film as a whole. So, essentially, Cats & Dogs: The Revenge of Kitty Galore affirms itself as a mediocre sequel to a mediocre movie, a film that is certainly watchable and that the kids will definitely enjoy but that really shouldn’t anyone’s first choice to see at the cinema right now.