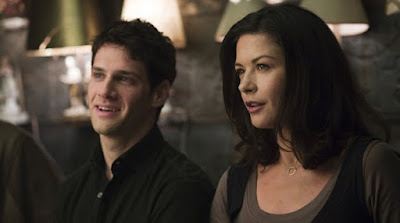 The latest Hollywood romantic comedy to choose New York City – probably the most overused setting not only in romantic comedies but in American films as a whole – as its setting certainly doesn’t have one of the most original concepts. After all, anyone who has seen the 2006 Uma Thurman film Prime will get more than a slight sense of familiarity upon seeing The Rebound, the latest romance to see an older woman – in this case Catherine Zeta Jones – fall for a younger man – here played by Justin Bartha, best known for his roles in The Hangover and the National Treasure films. However, while originality may not entirely be on its side, this isn’t necessarily a bad thing. Plenty of romcoms retread concepts that have been done many times before and work while others than attempt to feign originality by going the high concept route have failed miserably, as demonstrated by numerous romantic comedies in the last year. Writer and director Bart Freundlich may not have the most illustrious track record among romcom filmmakers but his 2006 film Trust the Man showed him to be quite capable at approaching the genre from a different perspective, that film avoiding many of the clichés that so bog the genre down and demonstrating a knack for dealing with grown up relationship issues in a humourous fashion. So does his latest offering The Rebound see the romantic comedy genre rebound after the many disappointments of the last year or is it just another example of mediocrity in a genre that is running low on ideas?

After discovering that her husband has cheated on her, Sandy (Catherine Zeta Jones) packs up and moves to New York for a fresh start with her two young children Frank (Andrew Cherry) and Sadie (Kelly Gould). One thing she’s not prepared for, however, is a return to the dating game after years as a wife and mother. Handsome chiropractor Trevor (John Schneider) has potential, but Sandy still has trust issues and pent-up anger to contend with and a disastrous first date sours things. When Sandy employs a 25-year-old male nanny named Aram (Justin Bartha) to look after the kids, romance is the last thing on her mind. But gradually she finds herself drawn to this sensitive and much younger man. When it starts to get serious, Sandy’s friends, particularly best friend Daphne (Kate Jennings Grant), think that she’s just on the rebound and will soon move on to a proper grown-up man. But could Sandy’s fling become the real thing?

Bart Freundlich could almost be considered a genius for what he has done with The Rebound. By not going the high concept route and opting rather to tell a simple straightforward love story he has made what is easily one of the best romantic comedies in recent years. Sure, the film doesn’t have one of the most original basic concepts but what Freundlich has done with it has create a film that mostly doesn’t conform to the typical romcom mould and avoids many of the clichés that are present in so many romance films churned out by Hollywood, only going the more predictable route late on and then only slightly so. The characters are normal everyday people as opposed to the successful career minded individuals we often see and the successes that they achieve as the film progresses are both natural and plausible and, because we see how they accomplish their achievements, we really do believe that they have earned everything that comes to them. This means that the characters are both more relatable and more likable. Relatability is, in fact, a key theme here as many of the issues the film embraces are ones that members of the target audience may well be familiar with, having faced them first hand. And it is from this relatability that much of the humour emerges. The laughs here don’t come from lame gags but rather comical situations and honest and truthful observations. Sure, there is some physical comedy – which Justin Bartha is very game for – but even this is as much in the same vein as the more observational humour. There are no cheap shots to be found here, just sincere and genuinely laugh out loud funny moments of humour that ensure that this is one comedy not to be missed. In particular, the reactions of the children are frequently priceless. A lot of the success of the film can indeed be attributed to Freundlich, whose direction and writing are spot on and who once again shows a knack for dealing with the romance from a more mature, grown up perspective. The script is excellently written, perfectly blending the humour with a very sweet and believable love story, the dialogue is both truthful and authentic sounding, the characters are all extremely well developed and, perhaps most importantly, the film isn’t just side splittingly funny but also very sweet and charming, the film succeeding every bit as much in the romance department as in the comedy area. Of course, Freundlich can’t take all the credit. The cast are just as important to the success of the film, with pretty much everyone being excellent. Catherine Zeta Jones is equally delightful and convincing as a housewife who finds her life turned upside down only to find true love in the least expected place and her chemistry with co-star Justin Bartha really does spark, making us truly believe in them as a couple. Bartha perfectly captures the youthfulness and awkwardness of his character and is showing himself to be a very likable and charismatic leading man. Elsewhere, Kate Jennings Grant’s performance as Sandy’s best friend is full of vibrant energy and kids Andrew Cherry and Kelly Gould steal the show in every scene they are in, never once irritating and always being hilarious. So, all in all, The Rebound is one of the most pleasant surprises of 2010, a romantic comedy based around a predictable concept that proves to be anything but conventional. After a number of high profile disappointments, the romantic comedy genre truly has rebounded.