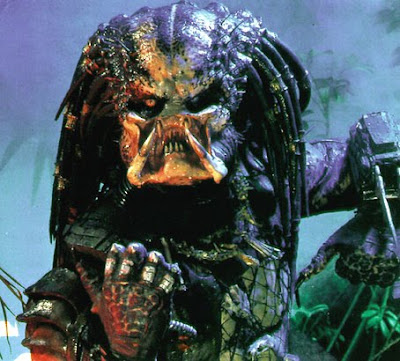 “Fear is reborn” is the claim made by the trailers and posters for Predators, this year’s eagerly anticipated sequel to the original Predator films (ignoring the Alien Vs Predator films) that sees the series return to its roots following the somewhat mediocre reception to the Alien Vs Predator movies that saw the Predators go up against the Xenomorphs from the Alien movies. Coming 23 years (or this critic’s entire life to date) after the original sci-fi classic Predator started it all, this revival is brought about by Robert Rodriguez who conceived the basic plot back in 1994 while working on Desperado but whose script was rejected on the grounds that it would be too expensive to make. Last year, the studio decided to follow through with his script, in the end opting to go with an updated script not written by him but rather first time writers Alex Litvak and Michael Finch. Notably, Rodriguez is also only on producing duties (due to his commitments to this year’s also eagerly anticipated film Machete), directing duties being handled by Nimród Antal who was given the role because Rodriguez enjoyed his earlier films Control and Vacancy. Clearly, the journey to getting onto the big screen has not gone entirely as well as could have been hoped for (Rodriguez having a significant amount of creative control over the project and those who have worked on it but not actually writing or directing it) but does Predators (a title intended as a double-entendre, describing both the alien hunters and the human characters who they are hunting) manage to follow in the footsteps of Aliens in being a superior sequel?

Royce (Adrien Brody) is a cold-blooded mercenary whose only allegiance is to himself and those who pay him. Mysteriously transported to a hostile jungle terrain, he meets a group of others who’ve been taken, including Cuchillo (Danny Trejo), Noland (Laurence Fishburne), Isabelle (Alice Braga), Nikolai (Oleg Taktarov), Hanzo (Louis Ozawa Changchien) and Mombasa (Mahershalalhashbaz Ali). With the notable exception of physician Edwin (Topher Grace), they are all remorseless killers – soldiers, mercenaries, Yakuza, cartel members, convicts, death squad members. Slowly the group realizes that they’ve all been specially chosen for a reason. They are on an alien planet that is a gigantic game reserve – and they are the game. Then the killing begins. As his companions are systematically picked off by invisible killers with advanced weaponry, Royce reluctantly becomes the survivors’ leader, desperately seeking a way to combat these unstoppable alien Predators.

Anyone who has seen the original 1987 Predator film will get a clear sense of familiarity when seeing Predators. After all, the basic scenario is virtually the same as that of the original film, only based around a somewhat more disparic group of characters and set on an alien planet. In many ways in fact, the film is something of a throwback to the action movies of the 1980s (something which seems to be very in this year) but rather than making the film seem tired, stale or unoriginal, returning to the roots of the franchise and a more back to basics approach proves to be quite a smart move and it is clear that this is a film made with fans in mind, with everything that made the original film the classic it was being present and accounted for, including the infrared Predator view shots and a well placed reference to the original film being provided by Alice Braga’s character. Wasting no time in getting started – the film kicks off with the characters literally being dropped onto the planet – director Nimród Antal bides his time before actually introducing the Predators but starts building the tension from the let go, creating a genuine sense of threat before we even get to see the alien hunters themselves. And when they do appear, they do not disappoint, being excellently realized thanks to great make-up and prosthetic effects. The Predators are not the only alien creatures either with others being realized through some solid, if not amazing, visual effects work. Antal also doesn’t shy away from the red stuff, delivering a number of fairly gory scenes but fortunately avoiding the grotesque excesses that many scare flicks embrace nowadays. Viewers with a squeamish temperament should find that the film doesn’t deliver too much to make them squirm and stays well on the right side of the line that shouldn’t be crossed in what is depicted. The action sequences provided by Antal are well executed and shot and effective use is made of the terrain in which the events are taking place. There is certainly much to please the fans here and anyone who has ever wanted to see a man take on a Predator with nothing more than a samurai sword will definitely be satisfied. The alien jungle planet itself, while perhaps seeming a bit too Earth-like at times, is a suitably foreboding backdrop for the action. Plot and character development are fairly minimal here but the film delivers just as much as is necessary – which isn’t all that much really. We know as much about each of the characters as they know about each other and we really do not need to know anything more. They are killers, just like the Predators, and this is all that really matters. There is, however, one somewhat surprising revelation with one of the characters but I won’t spoil it here. On the performances front, Adrien Brody, hardly the obvious choice for a tough guy role or an action (anti)hero, actually proves very convincing in the role and brings a degree of gravitas to proceedings. Sure, he won’t win any awards for his performance but he certainly portrays plenty of machismo. Elsewhere, Alice Braga proves suitably tough with a hint of emotion, Topher Grace surprises (I won’t spoil it), Laurence Fishburne delivers one very cool, if all too brief (it’s really just a cameo), appearance and Robert Rodriguez fans will enjoy the presence of Rodriguez regular Danny Trejo. So, all in all, Predators is a well executed movie that does the original film proud, even it is somewhat unlikely it will ever be regarded in the same class. It isn’t quite the Aliens of the Predator franchise but it is most definitely a film with plenty to offer the fans. Is fear reborn? Not exactly, but it is revived for a whole new generation.