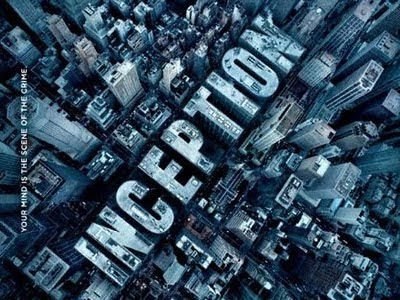 Following the mega blockbuster success of The Dark Knight the powers that be at Warner Bros Pictures have awarded writer and director Christopher Nolan an almost unprecedented amount (unless you’re James Cameron at least) of creative control over his latest feature and he has chosen to exert this control over what is without a doubt one of the most intriguing and original blockbusters seen in a very long time. Eight years in the making (Nolan originally pitched the idea back in 2002 after finishing work on Insomnia but decided that, rather than working on the script as an assignment, it would be more suitable to his working style if he wrote it as a spec script and then presented it to the studio whenever it was completed, which he originally thought would only be a couple of months after starting but ended up being years later) Inception is that rarest of things in Hollywood today – a truly original film based on a truly original concept devised entirely for the screen, i.e. something that isn’t a sequel, prequel, whatever-quel, remake, reboot, comic adaptation, TV adaptation, book adaptation, video game adaptation and so on (in fact, it is Nolan’s first film since his feature debut Following that is a completely original work) – and Nolan has pulled out all the stops to ensure that it is a film that will be well remembered even if it is not entirely understood on its initial cinema release.

Dom Cobb (Leonardo DiCaprio) has mastered the dangerous art of extraction, stealing secrets from deep within a victim’s subconscious while they are dreaming. Cobb’s rare ability has made him a top player in a treacherous new world of corporate espionage, but it has also made him an international fugitive, cost him everything he has ever loved and forced him to sever ties with his children and his father Miles (Michael Caine). Now, following a failed job to steal information from the powerful Saito (Ken Watanabe), a job that has resulted in the corporation employing him to send people to hunt him down, Cobb is being offered a chance of redemption. One last job could give him his life back, but only if he can accomplish the impossible – inception. Instead of the perfect heist, Cobb and his team of specialists – Ariadne (Ellen Page), the architect of the dream world; Eames (Tom Hardy), a forger who must convince the mark that he is someone else – family friend Browning (Tom Berenger); Arthur (Joseph Gordon-Levitt), the pointman who finds himself facing his greatest ever challenge in the face of the surprises the latest job has in store; and Yusuf (Dileep Rao), the chemist who must keep them alive and ensure that they awake once the job is done – have to pull off the reverse – their task is not to steal an idea but to plant one. Their mark is corporate boss Robert Fischer Jr. (Cillian Murphy) who is set to follow in the footsteps of his father Maurice Fisher (Pete Postlethwaite) following his death but whom they must incite to decide to break up the company. The job seems simple enough on the surface. But no amount of careful planning or expertise can prepare the team for a lethal enemy that seems to predict their every move as the team must not only fight the inner workings of their mark’s mind but also the projections of Cobb’s own tortured subconscious that are seeping into the dream, notably the memory of his dead wife Mal (Marion Cotillard), who is determined to keep him in the dream world forever. With only a limited amount of time to carry out the job and their very lives hanging in the balance, Cobb and his team find themselves pushed to the very edge as the boundaries between the dream and the reality come crashing down.

Inception is not your average Hollywood blockbuster and for this reason alone it is a film that must be seen. Offering up superb writing, fantastic direction and excellent cinematography, Christopher Nolan has crafted something that is not only great entertainment but is also guaranteed to make you think and will surely inspire much debate. A complex mindbender with a twisty and turny plot that is sure to warrant repeat viewings, you really do need to watch closely and avoid toilet breaks if you have any hope of following the intricate plot. Such is the complexity of the plot – the dream within a dream within a dream (and, at one point, within a dream again) scenario will confuse the hell out of less observant viewers – that some may well feel somewhat bemused by some of the goings on but stick with it and you are richly rewarded. This is a film that really does have much to say and by setting out to challenge the intellects of moviegoers as well as dazzle with impressive visual effects and thrilling action sequences it achieves something that is too little seen – both flash AND substance in the same film. The film indeed does truly dazzle with its superb visual effects and thrill us with a superbly executed action sequences but, unlike many Hollywood movies, this stuff isn’t mere popcorn fodder. For once, as much substance comes from what we actually see as what is going on beneath the surface. The dream orientated nature of the concept means that anything and everything is possible and the visuals all have deeper meanings than just to wow the audience with spectacle, for instance scenes showcasing paradoxical architecture, cityscapes folding, exploding and crumbling, gravity defying fights and the many chase sequences and shootouts are all visual representations of aspects of the human subconscious, highlighting the mysterious way in which our dreams function and raising serious questions about our perceptions of what is real and what is not. These visually inventive and creative sequences all prove as stunning intellectually as they do visually and, coupled together with the fantastic script that lays out the complex rules of the dreamscape without ever seeming pretentious or condescending in its approach, ensure that you leave the cinema not only having thoroughly enjoyed yourself but also pondering some serious food for thought, perhaps even questioning your own perception of reality. After all, if dreams seem real while we are in them, then how can we ever really tell the difference between dreams and reality? Of course, this is as much a crime thriller as it is a film about dreams and in this regard the film also delivers. In a fashion, this is kind of a heist movie, only one that is set within the confines of the human mind, and Nolan superbly captures all the aspects necessary to make the film work in this way. From start to finish, the film is packed with scenes of genuine suspense and tension and this is achieved without the need to resort to cheap gimmicks (notice also that Nolan wisely avoided going the popular 3D route, although 3D could potentially have been utilised effectively in the filmmaking process). Also, while the action sequences are intended as metaphorical representations of conflicts occurring within the human psyche, they are also great fun as well, being brilliantly shot and executed, perfectly woven into the plot rather than just thrown in for the sake of it and displaying true craftsmanship on the part of Nolan. This craftsmanship is present in every aspect of the film, in particular the script with Nolan providing a perfectly timed and thoroughly well developed narrative, some surprising revelations, moments of smart humour and excellent dialogue with is channeled with much gusto by the film’s pitch perfect cast. There isn’t a weak link to be found here with every actor performing superbly. Leonardo DiCaprio once again shows why he is one of the Hollywood’s great leading men with a performance that embodies pure emotion and perfectly captures his character’s fractured and tormented inner self. As the dead wife who continues who haunt him, Marion Cotillard convinces as the almost malevolent shade of the woman who once was. Brit actor Tom Hardy is also excellent, not only being believable but also proving quite humourous as his character blows up much of what he sees. Rising stars Ellen Page and Joseph Gordon-Levitt also excel as do Cillian Murphy, Ken Watanabe and Tom Berenger. The only gripe is that Michael Caine’s screen time is rather limited but this is only a very minor complaint that in no way stops this from being a brilliant film. All in all, the cast is outstanding and the same is true of every other aspect of the film. Inception is quite possibly Christopher Nolan’s finest work and is without a doubt the most intelligent and most enjoyable moviegoing experience of the year so far, and one that will be hard to top. If you want to see a truly unforgettable blockbuster I highly recommend that you see this right now. And, if you have difficulty following it, watch it again. Inception may be complex and, on occasions, slightly difficult to follow but it is never incomprehensible and this is perhaps Nolan’s greatest triumph here – a film with an extremely complex plot that really does make sense and doesn’t underwhelm in its resolution. One word to describe this film – masterpiece.