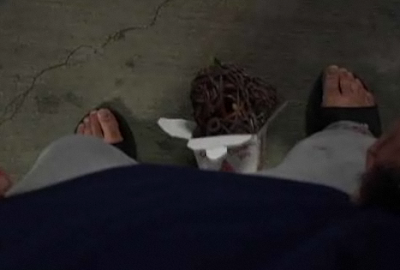 Have you ever wondered what it would be like if you’re Chinese takeaway turned into a monster and started trying to kill you? I’m guessing not. But if, by some chance, you ever have, then I suspect that Take Out will be a film for you. Delivering exactly what I just said, this (very) short film sees an unsuspecting couple fall prey to a rather vicious box of noodles. Played entirely for laughs – which is pretty much the only way you could go with such an absurd concept – this is really a one joke film, the humour being based entirely around the ludicrosity of the premise and the punchline that comes in at the end. Some will no doubt find the film hilarious, others will find it lame. This critic is in the latter category. And while it is clear that the filmmakers had a lot of fun making this, the overall result doesn’t really overcome its amateurish production values. Nonetheless, though, compared to many of the other viral videos, it is clear that the people who made this have a passion for filmmaking, just not necessarily the ability to do something that will be remembered as more than just a viral video if it is even remembered at all. This is a film for the YouTube generation and if you spend your free time surfing YouTube for the latest humorous videos you may just love this film. If, however, you are, like this critic, a more discerning film watcher, you will not find much to even like here.

Take Out can be viewed in full here:
http://www.funnyordie.com/videos/be87a4a0ee/take-out