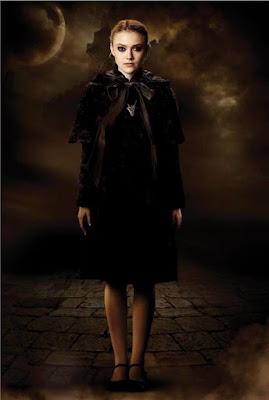 From MySpace from all places…

“…Summit just released photos of the powerful coven online. We lucked out on our exclusive: feast your eyes on Dakota Fanning as Jane. When it was announced that the 15-year-old actress had been cast we knew we were in for a treat. Check out the photo of Jane (above) and her bio below…”

“This may hurt just a little.”

CHARACTER DESCRIPTION:
Jane is a high ranking member of the Volturi Guard. The Volturi were waiting to change her and her brother Alec until she was older, but humans—believing her and her brother to be witches—tried to burn them at the stake, which forced Aro to act while the twins were little more than children. Jane’s experience with the pain of burning alive shaped her into a potent weapon – she developed the ability to inflict immense pain on others with only a look.

VOLTURI
1) The Volturi include: Aro, Caius, and Marcus as the leaders, and then Jane, Alec, Demetri, Felix, Heidi, and several other unnamed members of the guard.
2) The Volturi are similar to a ruling body, and protect the secret of vampires by wiping out any “problems” as vampire law defines.
3) The Volturi live in an ancient Tuscan city called “Volterra”.
4) Aro and Jane’s powers do not work on Bella.

Director Chris Weitz on the Volturi —
“No matter how strange one of the characters is in a work of fantasy, I think you have to approach them as people and then so you start to think, ‘They’ve been around for 2,000 years. How would they interact with one another?’ The conclusion was that after 2,000 years you’d probably be more than mildly insane. No matter how cultured or gracious you appear on the surface. And I think that’s what Michael Sheen managed to portray as Aro, the head of the Volturi — on the surface he’s terribly gracious, warm, a wonderful host and at the same time he’s lethal and frightening. It’s also what Dakota Fanning conveys as Jane. She’s innocent looking in appearance but she’s absolutely deadly. The first thing I wanted to do was put them in a setting that wasn’t Dracula’s castle. There have been so many vampire movies and werewolf movies and horror movies where everything has been dark and dreary. Instead, their headquarters is surprisingly light and crisp. And the characters that they play have a kind of a tactile reality to them in spite of how bizarre their situation is really. The whole point is not to leave Forks, Washington where everything has really been quite realistic and then suddenly go to a location that completely throws you out of the movie. And the set although it’s huge and grand and magnificent actually feels like a real place.”