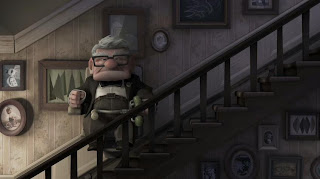 It was something of a disappointment to me when Wall-E wasn’t the greatest film of all time. Perhaps it was the promise built up around it, that it was going to be a silent film (in essence), that it was incredibly bleak and satirical, whilst at the same time a romance akin to Woody Allen’s Manhattan, but, with robots, and that the idea and the character were born of the very first Pixar meetings. Don’t get me wrong, Wall-E is a great film, very unique and interesting, but far from the masterpiece I was expecting.

I’m also not of the opinion that Pixar have had an absolutely flawless run of movies, most people seem to overlook A Bug’s Life in the filmography (it was far inferior to Dreamworks’ under-rated classic Antz), meanwhile Monsters Inc. was highly inventive visually and the partnership of Billy Crystal and John Goodman was wonderful, but the film didn’t grab me storywise or tug my heart-strings (as it did many others), Finding Nemo similarly failed to move me (and I’m not a cold-hearted grump, Men In Black II made me cry, but that’s another story). For me The Incredibles is Pixar’s strongest film, and I attribute this entirely to Brad Bird who is one of the greatest film-makers of our time.

I had no idea that the Glastonbury Festival had managed to wrangle a sneak preview of Pixar’s latest (already out in America, but not out here in the UK until October), and made my way to the cinema tent on Sunday morning an hour early to beat the queue (I didn’t, such is the draw of Pixar). After the delightfully funny short Partly Cloudy the main feature (in Real-D) began.

I had no expectations of Up other than the pre-conceived notions one usually associates with Pixar, which is a loving level of care and attention placed into really fine tuning the narrative, characters and heart of their movies. I knew the basic premise, that an old man craving some adventure attaches thousands of helium balloons to his house and goes travelling, with an unexpected tag-along in the form of Boy Scout Russell in tow.

What I really didn’t expect though was to be sitting here wondering what possible film could pip this to the post of film of the year? Up, for me, doesn’t have the satire and depth of The Incredibles, but it is an absolute joy from start to finish (though occasionally dark and depressing). I was truly surprised to find myself welling up one moment and then howling with laughter the next, the film succeeds in being Pixar’s funniest efforts to date and at the same one of its most human and emotional, also featuring some absolutely sterling action sequences that put any of this Summer’s so-called blockbusters to shame. Indeed, watching this film and the seemingly effortless craft involved it is sad that so many other movies fail to get at least one of the many ingredients contained herein right.

The real joy in this film is how many surprises it has in store, so I’m going to keep schtum and hope nobody else spoils it for you, but this is such a magical, wonderful, witty and wise movie that I just can’t recommend it enough. I’ll definitely be seeing this again in October!