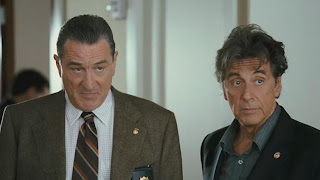 There’s a copy of Righteous Kill sitting in my house right now and I have no desire to watch it. It’s not a rental, it’s there to stay, I could put it on whenever I felt like it, no pressure. I could take any 90 minutes out of my procrastination filled lifestyle and sit down to watch Robert DeNiro and Al Pacino as cops working together. Yet I feel no strong leanings towards, not even mild leanings actually, I might just watch Mystery Men again or something.

Is it sad that a film featuring two of cinemas greatest leading men fails to ignite any passion in me as film-fanatic, it even fails to ignite morbid curiosity based upon the flick’s lacklustre reviews. Heck, I went to see Year One* at the cinema despite terrible criticisms, yet I just can’t be bothered with this. How is it that a pairing so magnetic and exciting in their brief shared screen-time in Michael Mann’s Heat – a film I sometimes watch just so I can see them in the coffee diner exchange – don’t hold the same fascination when sharing the screen for the full running time of a movie?

People criticise DeNiro a lot for just not being very good anymore, but is he actually not good or (a) are people judging him too harshly based on a string of stellar performances earlier in his career or (b) there just aren’t roles out there for an actor like DeNiro at present? And what about Pacino, how come he escapes the kind of stick that is regularly used to beat DeNiro’s efforts round the head? Has Pacino’s recent output been any better than DeNiro’s?

DeNiro came to prominence really off of the back of three films; Mean Streets, The Godfather Part II and Taxi Driver, though – in my opinion – better performances were to come with Raging Bull and The King of Comedy. DeNiro continued to impress from the late seventies into the early eighties, taking more diverse choices; Brazil, Midnight Run and his wonderful turn as Al Capone in The Untouchables. It was around 1990 after his excellent performance in Goodfellas that things got a bit stale, sure he still got to show off in the likes of Cape Fear, but the movies themselves weren’t great. In fact in the five years between Goodfellas and its spiritual sequel Casino, DeNiro’s finest portrayl was playing starkly against type as a meek crime scene photographer in the over-looked rom-com Mad Dog and Glory, most notable for Bill Murray’s incredible performance as a wiseguy.

But, really, five years of being good in poor films is nothing for a guy like DeNiro, most actors would kill to have just one of his lesser roles on their C.V. He hit another peak with Casino then Heat, and gave great – diverse and against type – performances in Wag the Dog and Jackie Brown, which showed off his gift for comedy, reaching its peak with 1999’s Analyze This and then 2000’s Meet the Parents. It’s here where I guess you could say the slump starts.

Despite playing against Ed Norton and Marlon Brando in Frank Oz’s entertaining romp The Score the rest of DeNiro’s output ammounted to soggy action thrillers like 15 Minutes and lame sequels like Analyze That and Meet the Fockers, most of which saw DeNiro coast along in auto-pilot.

Pacino’s career hasn’t exactly fared much better of late, and it seems to move through similar peaks and troughs. His work in The Godfather films, Serpico and Dog Day Afternoon put Pacino on the map as both a nuanced and explosive screen presence. But Pacino didn’t diversify as much as DeNiro did, sticking to tough guy roles in controversial films like Cruising and Scarface. It wasn’t until after lampooning himself wonderfully in Warren Beatty’s brilliant Dick Tracy and the dissappointing critical reception of The Godfather Part III that Pacino began embracing the lighter side.

Though Frankie & Johnny and Scent of a Woman aside Pacino always kept a toe in the tough guy world, with Carlito’s Way and the role of a top salesman in the masterful Glengarry Glen Ross. Along came Heat and Pacino followed it with, what is – in my opinion – his greatest performance to date, the role of ‘Lefty’ in Donnie Brasco. Pacino chose projects carefully, hamming it up in The Devil’s Advocate but getting to work with Oliver Stone, Michael Mann and Christopher Nolan as well.

However post-2002 things got wobbly, he had a supporting role in uber-flop Gigli, was in some vanilla thrillers like The Recruit and 88 Minutes (from the director of Righteous Kill) and popped up in the third Ocean’s movie. In my opinion what is less commendable about Pacino’s lacklustre output of late is that it displays a lack of guts and diversity, whereas DeNiro appeared in a string of flops or critical duds at least he has been inventive and interesting with his choices; often inspiring more hope in the audience that the next DeNiro film will be that glorious ‘return to form’. Pacino on the other hand coasts through roles that employ his usual tics, and so therefore could be more to blame when a Pacino movie is pretty dull.

Like DeNiro Pacino’s most recent completed credit is Righteous Kill, a film that ultimately seemed to squander in its advertising the impact of having these two legendary actors together on screen, or perhaps, the film is just so poor that no matter how it’s sold it only disappoints.

I think in the end there just aren’t many roles for actors like DeNiro and Pacino these days, and they bring a weight of past glory to any new projects that perhaps, sometimes raises people’s expectations about the film and their performance a bit too high. With both actors I’ve always enjoyed the performances and the films that didn’t make big impacts and feel that – given the right material – they are capable of greatness still. But I still don’t really fancy watching Righteous Kill…