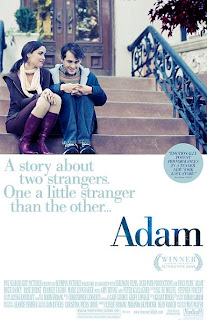 I just wanted to draw your attention to a film that is being released in cinemas on August 7th.

Adam, starring Hugh Dancy and Rose Byrne, is the first romantic comedy to revolve around a man with the condition known as Aspergers Syndrome and, as someone who experiences the condition, i would like to raise some awareness for this film which may well slip under the radar without being noticed by many people.

It has already won the Alfred P. Sloan Award at the 2009 Sundance Film Festival.

Soon after moving in, Beth, a brainy, beautiful writer damaged from a past relationship encounters Adam, the handsome, but odd, fellow in the downstairs apartment whose awkwardness is perplexing. Beth and Adam’s ultimate connection leads to a tricky relationship that exemplifies something universal: truly reaching another person means bravely stretching into uncomfortable territory and the resulting shake-up can be liberating.