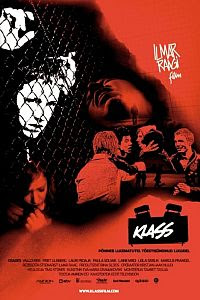 The Class (Klass, 2007) is a powerful Estonian film in which school bullying is represented at its most extreme. Sixteen year old outcast Joosep suffers a life of torment at the hands of his seemingly merciless peers. It is only Kaspar who rises courageously against his friends and the instigator, Anders, in order to defend Joosep. The two boys are subjected to daily beatings and homophobic abuse. This leads to an unforgettable scene on the beach where Kaspar is forced to perform a lurid sexual act at knifepoint. Humiliated, excluded and publicly stripped of their honour, which is an explicit theme established at the beginning of the film, the pair seek bloody revenge. Described as a riposte to Gus Van Sant’s Elephant (2003), the plot is predicable at times and narrative clues do point visibly to the dramatic climax of the film. For instance Joosep’s father keeps guns in the house and tells his son “the man who does not fight back will be a loser one day”. Regardless of this, the delivery is so adept that is it impossible to remain detached emotionally from the characters. To watch Joosep as he is demoralised and isolated is even more affecting than the massacre which concludes the film. The Class is based upon genuine accounts of bullying and the style of filming is documentary like. These factors undoubtedly add to the impact, along with a commendable soundtrack which compliments the drama.

Personally, I was so overwhelmed by the film and in particular by Vallo Kirs, the actor who plays Kaspar, that I remained silent as I left the screening and it lingered in my thoughts for some time after.