We Love/Hate The Dude 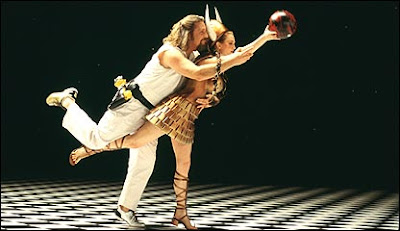 The Big Lebowski is just about 10 years old. It’s a film that split cinema audiences down the middle but created a strange cult. The BBC asks – Is The Dude a slacker prince for our times ?

Below, I have nicked some of the readers’ comments…

Love of The Big Lebowski is one of those rare things upon which whole wonderful friendships can be built. In addition to its eternal quotability is the fascination that comes from the fact that many of the events in the film came from real life and many of the characters – Little Larry, Walter – are real people. And The Dude? Sometimes, there’s a man, well, he’s the man for his time and place and maybe if we were all a bit less un-Dude we wouldn’t have the problems we have at the moment.
Jackie Treehorn, Malibu Beach I experienced my first underwhelming viewing of The Big Lebowski at the cinema upon its release. I can’t remember being particularly impressed, thinking “it’s no Fargo/Hudsucker Proxy/Blood Simple” etc. Ten years on, I’m not quite sure how it happened, but it has now beaten the likes of Apocalypse Now, The Empire Strikes Back, Blade Runner, Lawrence Of Arabia and Citizen Kane as my favourite all-time film. I’ve no idea when I first noticed the genius of Walter and Donny’s love/hate relationship, or the timeless strut of Jesus, or the hilarious subtlety of the script that just grows on you like your favourite album. The Coen Brothers have worked some magic in their time, rarely missing the spot. But I don’t think they ever hit the spot so perfectly as they did with The Big Lebowski. They got career-best performances from the two leads, combined it with perfect pace, direction, cinematography, soundtrack and made the perfect film in my opinion.
David Harrison, Birmingham Repeated watchings of The Big Lebowski have just got me through a difficult four-day labour… I just hope my son will like the film as much as I do!
Lisa, Swansea