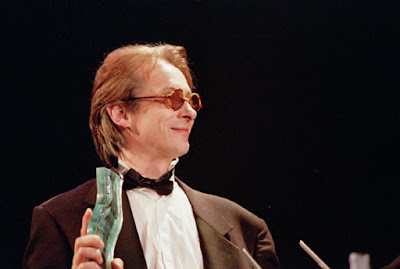 Elliot Grove is the founder and director of The Raindance Film Festival which is the UK’s largest independent film festival. He is a very busy man. He has his fingers in a large number of pies.

I managed to slot in some time to chat with the pie-fingering film festival founder. Below is the result.

Hi Elliot, thanks for talking to me. Are you all rested now the festival is done and dusted ? I hear it was a quite a success….
One never rests after a festival – even though one’s body is screaming for sleep. The festival crossed new ground this year – with attendance up 38% (actually it was up 37.95%) and distributors hounding filmmakers – which is what it is all about: Talent meeting Money in a bull ring with hundreds of screaming film fanatics. And we are already hard at work on the 2009 edition.

It’s growing then ? What’s the reason for the 37.95% shoot up ? Must be the refreshments …
Well, it definitely isn’t the popcorn ! We really scored a few coups this year that got the whole city buzzing. Having Faye Dunaway here for the screening of Flick certainly here certainly created a stir, then there was Beastie Boy Adam Yauch, rock and roller Les Claypool and Hollywood’s Corey Feldman. Stars bring in fans. We also had terrific marketing supplied by Organic.

I think the thing that really keeps people coming back to Raindance are the films – films that everyone this year agreed comprised probably one of the best festival lineups of any festival anywhere.

Faye Dunaway, Beastie Boy Adam, Les Claypool, Corey Feldman – sounds like quite a pop group ! How was Ms. Dunaway ? She is awesome, I loved her in Chinatown, fancied her in Bonnie & Clyde, but didn’t enjoy Mommie Dearest. Did she mention Mommie Dearest ?!
She doesn’t like talking about Mommie Dearest. She does however, have an amazing knowledge and interest in independent film. When I met her out of the limo, she greeted me by name, and knew all about the fact that we had shown Blair Witch and Memento. She was in Europe to promote Flick, the low budget comedy horror directed by Dave Howard, and to drum up investment for a movie she wants to direct about the life of Maria Callas. She is a real dynamo, has boundless energy, and really knows how the industry works.

We need more people like you and Faye championing films made the indie way. Making a film from nothing is a long hard slog. You must have nuggets of advice to share…
I’m flattered to think of being lumped in with Ms Dunaway, but it there should really be no comparison. Faye Dunaway was one of the hugest stars on the planet. Now she is using her name and past pedigree to create interest in indie projects. Which is an interesting lesson for filmmakers to learn from: get the right project, and get someone like a Faye Dunaway attached to it, and then the finance and sales should, in theory, be far easier to attract.

Hear, hear. A film without a script doesn’t make sense to me. There’s a number of films around at the moment with bad scripts. They’re easily forgettable though. What films have stayed with you since you first saw them ? Obviously Superman 2 is on everyone’s list…
Independent cinema thrives because of the passionate stories the individual filmmakers tell. And independent filmmakers can tell stories that are often forbidden by the financiers and business people who dominate Hollywood. When a film succeeds, it is because it has a story.

The films we screen at Raindance share one thing in common: they all have a story to tell, and because Raindance is a film festival that is truly independent, we are able to screen films that court controversy and push boundaries making the films we screen unlike the typical fare seen at most other festivals.

Of the recent British films I have seen, the ones with story, and with style and imagination are: Somers Town, Hunger and Man On Wire.

Your passion for quality well written, indies is evident and we applaud you and your team for producing such a fantastic festival. But you must go home after a hard day and relax in front of some guilty pleasures?! Would you like you divulge any titles !?
Believe it or not, when I get home, usually late, I don’t want to use my eyes for anything else. I use my ears to listen to music – and I have eclectic tastes – anything lyrical.
As for my favourite movie of all time, it is Lassie Comes Home.

Can’t beat a bit of Roddy McDowall. Isn’t Liz Taylor in it too ? What music are you listening to at the moment, and how important is music in independent film ? I feel a decent soundtrack can lift a film. And we can hear a song that takes us back to a scene in a film straight away.
Exactly. Take Stuck In The Middle With You in Reservoir Dogs.
I guess the Raindance soundtrack that still sticks in the memory is Once, which screened last year. And hey! One of the songs: Falling Slowly, won the Oscar!

Once is a wonderful film. It must make you feel great when an indie crosses over. Or don’t you think about that ? Would you want more indies showing alongside Saw VII or Last Year Of Uni Musical or whatever ?
It’s an indie film festival director’s wet dream that ALL of Raindance’s movies would play in a multi-plex, and that the general public would share my enthusiasm for these movies, making Hollywood’s fare seem boring and pointless by comparison.
Which is not to say that Hollywood films are crap. I think when Hollywood films excel, they are amazing.