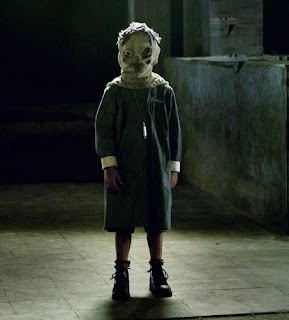 A transient mixture of mystery, adventure and uncertainty in a place like no other. A place where lost secrets hope to be found. A tale where love is lost. A tale that embodies an enigma, coils itself into another enigma and crawls into a chilling story.

The Orphanage is a well directed piece by Juan Antonio Bayona who managed to find the camera trickery to really set such a dark scene yet allowing the subtle composition of love’s connections at the same time. What we get is a great story entwined with your typical horror conventions that are well executed, such as the darkness eerie cave and the mesmerising feel of the house (this is integral to the story). This allows thought provoking focus for the entire feature and makes you think even after it is over. It does this by planting seeds of doubt in your head. Is she going crazy or can she really connect with a bunch of strange looking orphans with a point to prove ?

There is a sharp religious edge within the film. We carefully wince over the fact that there is a spirit word with lost souls to breach. This underlines the ever present question of faith (within the necklace given to Laura) and the presence of a few cheeky crucifix shots. The spiritual ghost-like vibe transmitted through the camera via ‘shaky cam’ as if we were in amongst the action. Tension was integral to this film. It was created with a great haunting score as if created in another world itself.

The casting is well though of, being fully believable in all roles. Little Roger Prince performed on the money and that little lady was freaky and graphic too. The right scenes contain the certain level of shock value needed to bolster the moving horror.

We have now established it’s a strong film…
…HOWEVER ! You get the impression it may have been watered down to target a US market. By this I mean that the ending is wrapped to quickly and is spelled out for the viewer to the nth degree. It all stuck so well until the last manic 8-10 minutes where it drives home what exactly happened and the escape of guilt the mother has for the adopted son Simon. (She could just get another one easily enough, like a puppy or goldfish…)

A great watch that thrills and excites you making your attention set deep into ‘what has happened ?’ and ‘what is going to happen next ?’ To the cinematography to the elegant sets this strong piece will get a reaction making you jump at a whim and keep you interested.

Spanish cinema will be presented to the world very well after both this and the thrilling Pan’s Labyrinth, it is the start of a new exciting genre if all works out well. Del Toro styled Mexican revolutiona.