Bumbling into a darkened room with strangers usually seems quite strange on a damp Tuesday evening. My inner monologue yelped “To the cinema” as I cantered in with great anticipation knowing Shane Meadows’ latest Somers Town was firmly on the game plan.

At grassroots, Meadows is amongst few highly skilled British film makers who is proud to see and does justice with being character driven with fluttering realistic settings. The black and white study of a social environment in gritty London shows he is a true to form traditionalist, almost a British-indie. ‘Brindie’ or ‘Indish’, at a stretch.

Friendship and young love amidst street level antics, being peppered with social issues. Meadows give a taste of what is real, what is far removed from the snooty film clique, in their ivory castles of pomposity. The supporting cast performs above and beyond what is expected, an example is Perry Benson who delivers some of the funniest lines whilst he continually pushes the lovable geezer ‘Dell Boy’ role perfectly.

Thomas Turgoose is starting to come into his own, showing the type of determined, malleable acting to get himself recognised more and more. Not just to say “Ah yes, that kid from This Is England” for once, he is one of Meadows’ preferred actors by choice and should keep working now whilst the acting iron is still hot. 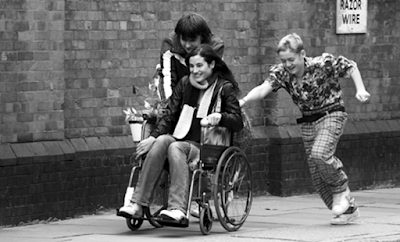 All the great stuff aside some things partially perplexed me, but only partially. Recently it was a debate with a friend who thinks both of the two love struck teens actually made it to Paris in the end. Nay. NAY I say.  This breakdown is needed for the people who hope they made it, as a reality check to piss over your juicy, ripe, tasty, hope-filled strawberries.  There are clear indications why they were unsuccessful as the camera turns from black and white into the gloriously colourful Super 8 style.

The first being money, or the lack of the two being able to rub sixpence together.  Or the fact that Tommo was never shown with a passport after his possessions were robbed at the start. Or even Polish Marek possibly didn’t withhold a passport either.

Through the rose tinted glasses “Just going to Paris and she will be there”. Yep, she is from Paris so I am sure you will find her easily enough. What does she look like? Ah, hot and French. That won’t be a mission in Paris then with the sheer mass amount of beautiful women on the streets with style and grace is of biblical proportions. (I personally enjoy France for reasons of this ilk.)

Ah, the pipe dreams of youth and that early stage of friendship. The hope of friendship that will always be there and stay the same. It never does. But Meadows captures that feeling of childhood friends that never frays or strays.

Some say the film is a little short. It was the expectation of ending this Paris dream of theirs that I personally needed. Being a bittersweet melodramatic lover of dark comedy I expected one more knife in the side of their dream in the form of a final reality check. That way the social realism could have flourished to really drive the issues home. Once in that low class, it is a continual struggle to get out of.

One can always dream through Super 8 tinted spectacles.