How John Cusack Let Ellen Down 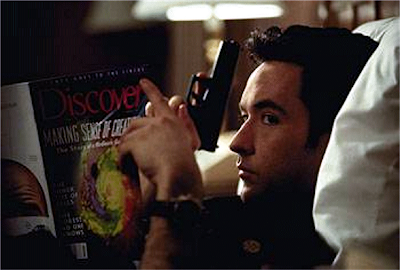 Another great piece written by our lovely Ellen…

The first time I really saw John Cusack’s small eyed yet symmetrically perfect face was in 2000 when I was a chubby fourteen year old. I randomly decided to watch the film Grosse Pointe Blanke starring and co written by Mr Cusack. I was probably flicking through the channels when I glimpsed the hamster face of Minnie Driver and thought, “Oh it’s that Irish woman off Circle Of Friends, my mum loves that film, let’s see what she is up to now.”
This lead to me witnessing a majestic piece of cinematic black comedy, which ignited a spark of admiration for the apparent character actor that was John Cusack. It was not his slightly odd yet dashing looks or array of black suits that swung it for me but rather his dry delivery of lines, the way he smashed a TV over Dan Ackroyd’s head and the fact he had brought about a film which made me understand and fall in love with films about assassins going to their high school reunions.

I was of course aware of John Cusack as a person up to that point, but in much the same way I was aware of pickles. I knew they existed but didn’t contemplate them and I had never gone out of my way to eat them.

From Grosse Pointe Blanke I went on to witness his face in the superb Being John Malkovich, the silly yet fun Con Air and the brilliant High Fidelity. I begin to think of him as this semi genius who played mostly miserable characters made mostly clever film choices and managed to avoid the celebrity life style. He of course made a few duds in that time, for example I rented out Pushing Tin one day when ill from school and it was like watching a relative sing an out of tune solo during the school panto. Embarrassing.

But then came High Fidelity and all was forgiven and I realised that he had been in two of my favourite films of all time, and had managed to capture a near perfect portrait of the male psyche and had helped write the screenplay for a very honest film about music, relationships and sex (I know he adapted it from the Nick Hornby novel but he perfected the task of playing the character faithfully and transferring the setting from London to Chicago without fucking it up). It was perfect, I thought we would have a entanglement for life, he would keep making sterling work which would eventually fill up my top ten film list and I would forgive him for a few errors here and there.

He made it with Kate Beckinsale.

I died a little inside, everything felt colder and sharper and everywhere I looked I saw their beaming little faces, their smiles never reaching their sad sell out eyes. Then he made Identity. I thought that the premise seemed good, I liked the mindless gore and horror, I watched with eager interest excited about what this eventual twist will be, I gripped the edge of the seat with my popcorn buttered fingers. I then found out that they did a sort of “it was all a dream” twist ending and a single tear spilled down my cheek. Why was he doing this to me? In interviews he had always claimed to be a actor of the highest ilk, hating publicity and avoiding the whole Hollywood blockbuster thing. This is what he claimed yet somehow he was selling out dramatically, and for someone who clearly knows how to read (I would hope) and sometimes write incredibly competent scripts why would he think American Sweethearts seemed like a good idea? Did he not realise that anything starring Julia Roberts which isn’t Closer is normally a pointless romantic comedy in which she looks like a duck? He must have thought that since he had made a couple of pointless romantic comedies with weak premises that one involving dogs would be a the next logical step, and so Must Love Dogs was released. By this point I was watching The Grifters on a loop and rocking backwards and forwards in a room pretending it was not happening.

I think the most disappointing thing was that Johnny seemed like he was just sleepwalking through these roles, he wasn’t even trying to pretend he fancied Diane Lane and ultimately it felt like he was just letting himself down (and still me obviously). Either his want to make interesting and un-Hollywood like films had deserted him completely, or he realised that money was a relevant factor to his life so it would be easier to say yet to a few rubbish projects to keep the money coming in. This all came to a head when I saw 1408, a unnecessary Stephen King adaption which neither scared or convinced me. It was not a bad film, but it wasn’t anything more then a stupid hammy horror film in which he interacts with a room and a green screen. He has now become to me the equivalent of a favourite band from my youth who are still going but not improving, still trying to recreate the magic of the past. Maybe all these bad films were to fund War, Inc his pet project which seems to have not really been released here at all and had a limited run in America, so I can’t even say if it’s a triumphant return to form? His early work lead me to have topical debates, lend out DVDs to vet potential boyfriends, want to work in a record shop, briefly consider becoming a assassin and a con artist whilst growing a straggly beard. But I shall always hold him dear in my heart. I will watch War, Inc and I will watch it with bated breath and a little bit of hope in my heart that there is still time for him to redeem himself to me.

Don’t let me down John.