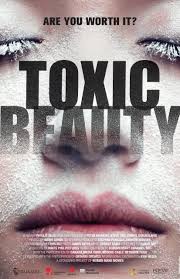 Toxic Beauty. The ingredients in your makeup could kill you.

Toxic Beauty is very much tip-of-the-iceberg stuff. Director Phyllis Ellis recognises this, and concentrates on two threads throughout. Firstly, a group of women affected by the Johnson & Johnson talc scandal. Secondly, medical student Mymy Nguyen’s decision to test herself for the toxins absorbed from her regular beauty routine.

Phyllis Ellis does not pitch makeup as the bad guy. She doesn’t press too hard on unattainable beauty standards—it’s mentioned, but the scare here lies in the fact that these toxins can be found in the most basic of hygiene products: soap, toothpaste, shampoo.

The European viewer can take a little comfort in the knowledge that many of these products are regulated in the European Union (that’s an example of the ‘red tape’ certain politicians are keen to do away with), but it’s a global problem, and a slippery fish at that. Formulations change, problem substances are renamed. It avoids becoming an extended advertisement for “clean” products, but does suggest that they exist.

The film is peppered with occasional appearances from glassy-eyed corporate creeps delivering their uncanny valley monologues. That these almost-definitely-not-a-bot-humanoids appear suddenly between interviews with real victims at their most vulnerable makes them all the more jarring.

We are familiar with this kind of behaviour, with so many examples of corporations engaging in a harm/cover-up loop, from Big Tobacco to The Radium Girls. But this doesn’t make Toxic Beauty any less heartbreaking. “Corporate greed is a type of cancer in our democracy right now.” A punchy statement tucked in right at the end of the credits. The speaker’s nameplate frustratingly out of view.

Hopefully Ellis is not done with this. There are many more avenues to explore with Toxic Beauty as a starting point. Her style is engaging and understated—shocking enough without trying to fabricate drama. It is informative without being dry.

I was expecting a Supersize Me for makeup, but it’s much more sophisticated than that. Spurlock went out of his way to prove a point, inviting drama in a Michael Moore meets Jackass stunt. In contrast, Mymy Nguyen and the other women are simply operating as normal, having been lulled into a false sense of security by large corporations. Worryingly, this type of exposé runs the risk of adding fuel to the anti-vaxxer fire—with their fear of chemical ingredients, but that’s a whole different documentary.