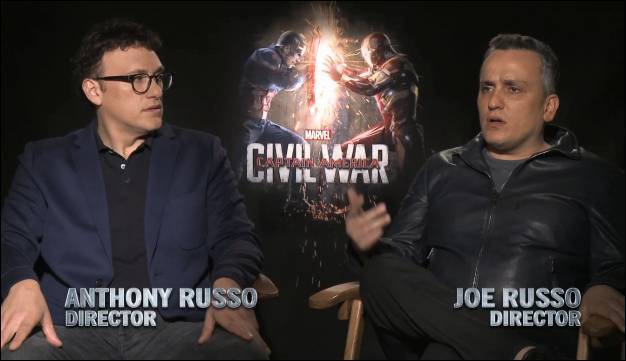 “IMAX is the closest thing we have right now to a fully immersive experience. It surrounds you with sound quality, the image quality, the scale of the image; it just enhances your whole movie-going experience incredibly.”

To celebrate the release of Captain America: Civil War IMAX provides a sneak peek at how directors Joe and Anthony Russo brought the movie to life in IMAX. This exciting video leaves fans on the edge of their seats with suspenseful scenes from the film along with commentary from Chris Evans, Anthony Mackie and Sebastian Stan on what fans can expect when experiencing Captain America: Civil War in the immersive IMAX format.

Directors Joe and Anthony Russo shot the major 17-minute battle sequence of Marvel’s Captain America: Civil War with the new ALEXA IMAX® 65mm cameras. This marks the first film to use the new 2D digital cameras developed under the partnership between IMAX and ARRI. Only in IMAX® theatres will these sequences expand vertically to fill more of the screen, providing moviegoers with even greater scope and breathtaking image quality for a truly immersive experience.

Marvel’s Captain America: Civil War finds Steve Rogers leading the newly formed team of Avengers in their continued efforts to safeguard humanity. But after another incident involving the Avengers results in collateral damage, political pressure mounts to install a system of accountability, headed by a governing body to oversee and direct the team. The new status quo fractures the Avengers, resulting in two camps—one led by Steve Rogers and his desire for the Avengers to remain free to defend humanity without government interference, and the other following Tony Stark’s surprising decision to support government oversight and accountability.

OUT NOW – EXPERIENCE IT IN IMAX® 3D