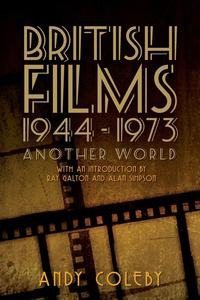 While the glitz and glitter of Hollywood seemingly dominates today’s movie scene, Britain is still proud to have produced many of the world’s most-loved motion pictures. Celebrating the nation’s littler-known works with gusto, cinema reviewer Andy Coleby is delighted to shine the spotlight on his new book of unsung classics.

‘British Films 1944-1973 – Another World’ showcases one hundred British films that, while they may not be cultural institutions, still hold their firm place in the movie world’s history books. British Films 1944 – 1973 Another World” is a unique guide to this period, adopting a radically new approach. A personally chosen and written review accompanies each of the 100 films plus a great deal of additional information is included. In their introduction, the legendary television and film scriptwriters Ray Galton and Alan Simpson (“Hancock’s Half Hour”, “Steptoe and Son” and “The Bargee,”) describe it as: “A very welcome addition to the lexicon of film history. Many of the films selected may be unknown to you and probably would not find their way into the majority of filmographies which makes it all the more worthy…..

The author wanted to expand each film’s history by accompanying his reviews with a wealth of other facts and information.

“Aside from each review, there’s heaps of information on each film’s cast, production studio, availability, filming locations, format and even facts on what else was popular on TV and in the music world at the time of each film’s release,” says Coleby, who frequently acts as a media commentator on the subject of British films.

One of the book’s biggest successes to date has been the highly-complimentary introduction by Ray Galton and Alan Simpson. They comment:

“This is a very welcome addition to the lexicon of film history. A lot of the films selected may be unknown to you and probably would not find their way into the majority of filmographies which makes it all the more worthy and interesting to the genuine film connoisseur and this is not because Andy included one of our films – but it helped.”