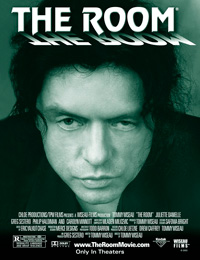 
This film was written, produced, and directed by Tommy Wiseau, who also happens to be the lead actor. It’s also one of the best bad movies out there. Wiseau plays Johnny (and also looks like he’s made of wax), whose future wife is cheating on him with his best friend.
The Room could be a moving story about betrayal and love if it weren’t for the terrible writing, acting, character development, and pretty much everything else. Wiseau’s strange use of English and thick accent, along with his dubbed lines and bizarre timing, make him the worst actor in his own film and make The Room more comedy than drama. Though the movie played briefly in Los Angeles, it can be seen at midnight viewings across the U.S. and other countries where fans throw spoons at the screen and toss footballs to each other as references to strange occurrences in the film.

The rest are here, thanks to Katina!