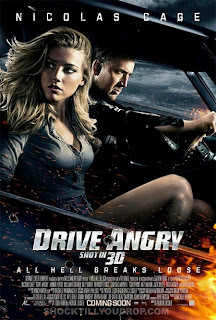 Well, well, well, well, well.  I was not expecting this!  The trailer was enough to get my interest, ladies, fire, guns and muscle cars. There was some discussion after as to whether the film makers and cast had taken it at all seriously, I hope they didn’t.

The film is all sorts of crazy, man escapes hell to avenge daughters death and save granddaughter from satanists, whilst driving cars, fast, and shooting guns, loud. Cage is by far the only man that would sign up for this and give it his maniacal best.

Amber Heard is a truly stunning woman and can swear and fight with the best of them. William Fichtner is so close to being Christopher Walken in his role as ‘The Accountant” that he almost steals the film. If this film was made by the guys behind Crank then we’d have a sure fire hit, all be it a frowned upon one.

However it wasn’t, and as much as i liked it and laughed at the absurdity of it all, sex-scene-slo-mo-gun-fights and dodge chargers being slung sideways every 3.7seconds, I felt that we were laughing at the film not with it.

Films like this have to have heart or at least a nod to say “yeah this is nonsense, but it’s our nonsense”, Piranha 3D and Crank 1 & 2 are these films. Drive Angry isn’t. In short it tried too hard to be mental, and did a good job but not a great job.