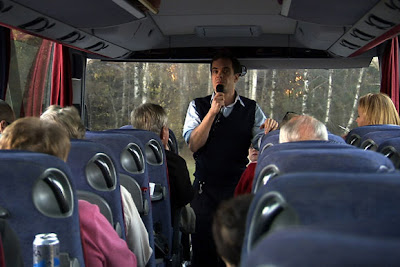 Isn’t it funny how people act differently when in groups? Involuntary is a little Swedish film by director Ruben Östland, charting the exploits of a collection of people as they interact with each other.
Ostensibly a social comedy exploring group dynamics, the film is episodic, following a trio of young girls as they head out for a night of teenage drunkenness, a lads weekend away, a long haul bus trip, a teacher who witnesses a colleague abuse a pupil and a birthday party that involves a firework-related accident.
Large chunks of the film are shot with long, unwavering takes, framed at odd angles. Sometimes the subjects are cut out of the frame or shot from long distance. It’s difficult to tell whether this style is truly artistic or lazy shorthand for artistry. While the largely unknown cast are all appear natural and handle the long takes well, whole scenes shot in the reflection of a car door make you wonder quite what the point is. Some sections of the film simply have the cast chatting in a seemingly ad-libbed manner, but at nearly 1 hour and 40 minutes, things begin to drag pretty quickly.
The most interesting episode – that of the teacher who sees her colleague hit an unruly child – is sadly underdeveloped, and you can’t help but wish more time had been spent with this group, rather than a bus-load of people who are stuck because their driver won’t move until someone admits they damaged the toilet. While the observations of how people interact in certain situations is often sharp, there’s an awful lot of filler in between. Intriguing as it is, Involuntary just drags.