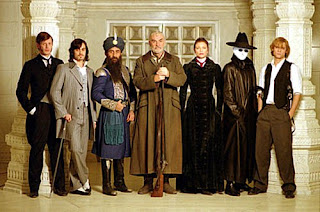 Poor Sean Connery, he turned down the roles of Morpheus in ‘The Matrix’ and Gandalf in ‘The Lord of the Rings’ because he didn’t “understand” the scripts, then, when each film came out and became the biggest movie of the year he felt, understandably, stupid. So, chose to accept whatever big effects-heavy script he didn’t understand that came his way…

When producer Don Murphy was working on the Alan Moore adaptation ‘From Hell’ he contacted Moore to discuss any projects the writer was currently working on. Moore told him about a comic he and artist Kevin O’Neill were polishing about, essentially, a Victorian superhero squad, kind of like the ‘Justice League’ of literature. Murphy was instantly excited and snapped up the rights to adapt that immediately.

Stephen Norrington the director of sleeper hit ‘Blade’ was brought on as director, the cast began to take shape, sets got built, the usual malarkey…

For me ‘The League of Extraordinary Gentlemen’ (or ‘LXG’ as the marketing department tried to sell it) is a film that I find watchable solely because I love the concept and the potential inherent in it, it’s just a cool idea that these icons of fiction all teamed up and solved mysteries, fought evil, had dinner, etc. I’ve never read Moore’s comic, and should because it’s undoubtedly going to tell a better tale than the ghastly screenplay from James Dale Robinson (himself a comic book writer); it’s unsurprising to learn that the film and comic differs, but due to Murphy’s haste to develop Moore’s brilliant idea the production of this movie began before the graphic novel had even been released.

There are some positives with the film as it is, the opening sequence on Victorian cobblestones as clueless British bobbies try to face off against a primitive tank, and the ensuing montage of events trying to drum up a World War is reasonably well executed. But this sense of momentum is sorely lacking in the rest of the film.

The art direction is lovely, with sets and costumes benefitting from the film’s $78million budget. Norrington’s choice to use model work over CGI was wise; though the scale of Nemo’s Nautilus doesn’t make the right impact, and the near-destruction of Venice falls flat, but this are the more the failings of the edit than the craft involved. Indeed, the film feels like a bit of a hatchet job and perhaps by the end of a tumultuous production Norrington was too exhausted to fight for his vision.

Connery and the director battled throughout the shoot, and Connery had the creative sway – and a producer’s credit – to have details changed, such as excising the plot of Quartermain being an opium addict when we first meet him, as is the case in the comic. Would he have stopped Gandalf from partaking of the pipeweed? Or would he have curbed Morpheus’ addiction to cakes?*

Though Connery was signed to a three-picture contract he announced his retirement from acting after ‘The League of Extraordinary Gentlemen’, it’s the last time Connery has been on screen and prompts me to hope he maybe makes one last comeback for an appropriate swansong. If ‘LXG’ had worked it would have been a fitting end to Connery’s career, featuring a surrogate father-son story between Quartermain and Tom Sawyer (a character written in to help appeal to American audiences), a bittersweet character arc that references death and fading in time and ultimately features Quartermain’s funeral as the film’s closing scene. (Though there’s a strong suggestion, as Connery’s contract commitment makes clear, that Quartermain wasn’t quite 100% dead yet…) The film also made reference to the James Bond era, naming the man sending the League out on their mission ‘M’, which is revealed to stand for Moriarty, and involves Richard Roxborough suddenly adopting a really cheesy Laaandaaaan accent. But the film’s a shambles, so, Sean goes out with a whimper not a bang.

The rest of the cast are so-so, as mentioned Roxborough pops in and out occasionally playing varying degrees of rubbish villain. The League features Indian actor Naseerudin Shah lending a great deal of charm and dignity to his portrayal of Captain Nemo; Peta Wilson – who was brought in when Monica Belluci dropped out – as Mina Harker, who has vampire powers (another departure from the comic, which also has Mina as the League’s leader); Tony Curran providing disappointing ‘comic’ relief Rodney Skinner, a thief who stole an invisible man formula; Stuart Townsend looking good but acting dull as Dorian Gray; Shane West playing the token American; Jason Flemyng delivering a fine performance as Dr. Jerkyll and Mr. Hyde (a really fun looking prosthetic suit). Sadly the team don’t really get much of a chance to develop camaraderie or even rivalries other than Connery telling them off a bit.

I guess the problems with the film are similar to those of the first ‘X-Men’ in that there’s so much to establish and in such a compact running time, in order to get enough showings per day to warrant a sequel. But what kept ‘X-Men’ afloat was the chemistry between its players, and it was there, buried away between the cast of ‘LXG’ because Tony Curran and Jason Flemyng’s commentary on the DVD is an absolute hoot! But it doesn’t show on screen, which is the film’s biggest crime, because audiences needed to want to spend time with these characters, and then really regardless of the story they’d be happy to come back and see them again for hopefully the film’s equivalent of ‘X:2’.

Maybe one day in the future someone will reboot this adaptation, realising the concept with all the potential it has seemingly oozing from every pore that’s so lacking in Norrington’s film; his experiences on the picture were enough for him to also retire from film directing, though he’s finally crawling back out of the woodwork with a new adaptation of James O’Barr’s ‘The Crow’. For me, if it’s on the box, I’ll always be happy to sit through ‘The League of Extraordinary Gentlemen’, but every time I watch it I’ll always hope that some secret magic has occurred and, this time around, it’ll be the film I hoped it was before I saw it for the first time.