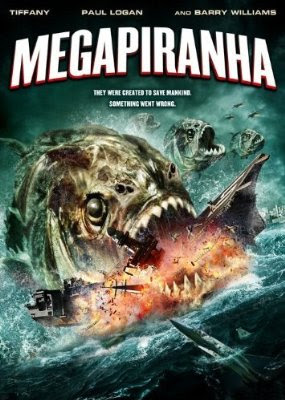 Well, I thought it was okay for a B-movie…
The tiny pause at the end of every line and the wooden reaction shots tell us where we are: B-movie hell. The monster fish are about as scary as tinned tuna. Paul Logan plays one of the least Special Agents ever sent to troubleshoot. The screenplay is credited to Eric Forsberg. Watch out for his work.

One Star / The Independent

One Star / The Guardian

Tiffany spends the film pouting, gaping and mangling her lines like a tranquilised yodeller. Poissonously bad.

One Star / News of the World

…mangily terrible Z-movie about mutant fish from the Amazon. Everything about it is deliberately, winkingly atrocious…

One Star / The Telegraph

The slightly overweight 38-year-old Tiffany (cast against type as a sexy scientist) is a more vulnerable presence. She’s there for who she was, not who she is.

Bad-movie enthusiasts will doubtless have fun watching these oversized piscine predators leaping from the ocean and laying waste to Florida’s coastal regions, but hasn’t this tiresome, kitschy, so-bad-it’s-good fad run its course?

One Star / Time Out

Low-budget B-movie tosh of the highest order. If you want decent acting, top special effects and a decent script you better give this a miss.

The ultra-earnest leads compete for the title of “most hammy performance”, a brainless script and ludicrously un-special effects recall the worst excesses of 1950s B-movies.

The not-so-special effects are thrust to the fore, so when the titular beasties attack a battleship – or a skyscraper! – we can ridicule every frame.

I could forgive all of this if the film bothered to be tongue-in-cheek about the whole affair but it took itself way too seriously and therefore lost any respect I might have had for it.

Half a Star / On the Box

Tension is replaced by guffaws and characterisation by macho posturing.

One and Half Stars / Eye for Film

At the end of the day, there’s only so much CGI you can take that looks like it was created on a Sinclair ZX Spectrum.

Only for the most indefatigable followers of camp. Playing an American ambassador eaten by piranha, Eric Forsberg is as bad an actor as he is a director.

There are probably many reasons why Eighties pop star Tiffany has languished in obscurity since her sole hit, I Think We’re Alone Now. There is, however, only one reason why we should all pray fervently that she returns there immediately and indefinitely. That reason is Mega Piranha. A film every bit as crass and blundering as the title suggests, it may even be unfair to single out Tiffany’s performance as Professor Sarah Monroe for particular scorn. Wooden and plodding it indubitably is, but compared to Paul Logan as Special Agent Finch, with whom she joins forces to battle a shoal of giant mutant piranha fish, Tiffany proves a veritable Meryl Streep. Possessed of an absurdly chiselled six-pack, which proves considerably more mobile than his facial features, he lurches from cliche to cliche with neither shame nor any discernible attempts to act. If, as seems likely, the whole thing is a knowing but terrible joke, then Logan is categorically not in on it. Incredibly for a film which presumably intends to at least alarm an audience, the budget seems to have been spent entirely on set-piece explosions with no money remaining for the actual fish.

Verdict: Deserves to be battered.