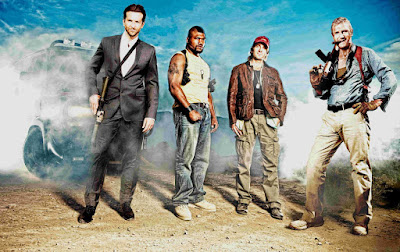 Movie remakes of old TV shows are perhaps one of the hardest things to get right. On one hand it is necessary to retain as much of the look and feel of the original as possible in order not to alienate the long time fans but on the other it is essential to create something that is accessible to those who have never seen the show if the film is to be successful at the box office. Particularly difficult is the recasting of much beloved roles with new, younger actors. The wrong choice in just one role can bring down the entire film. Some past television adaptations – Mission: Impossible and Charlie’s Angels come to mind – have overcome this dilemma by simply not featuring the original characters, rather opting to stay as faithful as possible to the spirit of the show but basing the film around a new set of characters created specifically for the film. The A-Team is not one of these films. Director Joe Carnahan’s reimagining of the cult classic television show which ran from 1983 to 1987 may update the story to present day, the characters now being soldiers serving in the Iraq War, but the characters themselves are exactly the same as they were in the show, only with different actors playing them. Fans of the show should fear not though as the roles have been so well cast that you might just be happy with the versions of the characters presented here.

Jailed for a crime they didn’t commit, an elite ‘Alpha’ Team of special-forces super-soldiers waste no time in busting out of their confines. Led by Colonel John ‘Hannibal’ Smith (Liam Neeson), the squad consists of hard-as-nails ‘BA’ Baracus (Quinton ‘Rampage’ Jackson), smooth-talking charmer ‘Face’ (Bradley Cooper) and the seemingly insane ‘Howling Mad’ Murdock (Sharlto Copley). But hot on their tail are both the forces of the CIA, led by dogged pursuer Lynch (Patrick Wilson), and the DOD, led by Captain Charisa Sosa (Jessica Biel). Living up to their reputation – “They are the best and they specialise in the ridiculous” says Charisa – The A-Team are forced to go rogue, utilising their amazing array of deadly and ingenious skills to clear their name and bring to justice the ones who framed them.

Not having seen much of the original show upon which The A-Team is based, I am not really qualified to comment on how it stands up as an adaptation of the show. What I can say though is that, on its own terms, this film is a hugely enjoyable example of popcorn cinema, the kind of film which requires you to leave your brain at home but is so entertaining that it is well worth doing so. There is no pretence of being anything more than a popcorn actioner here, the film being a distinctly old fashioned kind of action flick, the kind of which you might have seen in the 80s, and it for this reason that the film works. While delivering some snappy dialogue, lots of great humour and some nifty in-jokes, the writing is not exactly the film’s strong point. In the plot department the film is somewhat lacking, the storyline getting to be pretty incoherent as the film progresses, but action fans won’t care as the plot takes a back seat to a series of action sequences that are well shot and executed – even if the shaky camera style does grate on occasion – thrilling, occasionally humorous and, indeed, ridiculous – highlights being the team parachuting out of a burning plane in a tank before going on to fight a couple of fighter jets and fly the tank to the ground, and a performance of the world’s most elaborate magic trick. Some may criticise the level of CG saturation in the action sequences, with them mostly being done with visual rather than practical effects, but, while the CGI is a bit inconsistent, it mostly delivers at a satisfying standard. What really makes the film, though, is not the action sequences but the casting. All the key roles are cast to perfection here but the show is really stolen by Sharlto Copey and Bradley Cooper. South African actor Copey, who to date is only known for his role in last year’s District 9, is easily the highlight, delivering a truly hilarious performance and coming across as mad as a studio executive greenlighting a Pluto Nash sequel. Cooper, meanwhile does all the mannerisms of his role perfectly and is about as smooth and charming as could be hoped for. As for the rest of team, Liam Neeson nails it at the rough around the edges but loyal commander of the team while Quinton ‘Rampage’ Jackson proves to be worthy successor to Mr T, being suitably tough and badass while also doing a decent job at showing the character’s softer side. And the team members don’t just impress on their own but also as a group, for it is as much the terrific dynamic between them that makes the film work as it is their individual contributions. Sure, Liam Neeson’s Irish accent and Sharlto Copey’s South African accent may not seem like a perfect fit but this is easily forgivable. As for other cast members, Patrick Wilson is suitably slimy as a lecherous CIA agent and, as the only female member of the cast, Jessica Biel is decent, even if she can’t quite keep up with the guys. Fans of the show should also be sure to stay after the credits to see cameo appearances by original Dirk Benedict – the original ‘Face’ – and Dwight Schultz – the original Murdock. All in all, The A-Team is a thoroughly entertaining popcorn movie that does a pretty decent job at both respecting the original show and bringing it up to date. No doubt die-hard fans will have complaints – notably the failure to feature the original theme tune properly – but this really is grade A popcorn entertainment. Sure, it is ridiculous. But ridiculously good fun.