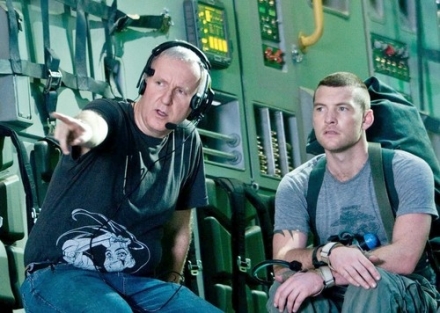 At the global box office, James Cameron’s Avatar has already earned a staggering $2,740,405,721 – that’s the highest amount ever earned by a single movie, the highest by a massive margin. Apparently, though, that amount just isn’t enough, as is evidenced by this week’s release of Avatar: Special Edition, a re-release that really seems no purpose other than to get even more money out of paying cinemagoers. Sure, it contains nine minutes of extra footage but the question has to be asked, why not just include those nine minutes in the original release of the film?

It is the year 2154 and Earth is a dying world. Jake Sully (Sam Worthington) is a paraplegic ex-marine who is dispatched to the distant jungle world of Pandora where a sinister corporation, run by corporate boss Parker Selfridge (Giovanni Ribisi), is mining a rare and extremely valuable mineral called Unobtanium. However, the native Na’Vi, a humanoid race who claim Pandora as their home, both physically and spiritually, are none too happy about the damage the humans are causing to their world. So, under the leadership of Dr. Grace Augustine (Sigourney Weaver), the Avatar Programme has been created to negotiate with the Na’Vi, the Avatars being genetically engineered beings made up of both human and Na’Vi DNA. However, while sharing similar appearance, the Avatars are not trusted by the tribe and the situation is rapidly deteriorating. Thus, Jake, the newest member of the Avatar Programme, is recruited by the gung-ho Colonel Quaritch (Stephen Lang) to get on the inside of the Na’Vi tribe and obtain intelligence that will be used against them. Initially, Jake is focused on his mission but everything changes when he encounters Neytiri (Zoe Saldana), a member of the Na’Vi tribe who believes there is something special about him. As he is brought into the tribe and begins to learn their ways, Jake finds himself falling in love not only with Neytiri but also the tribe and the entire world. Meanwhile, the restless Colonel moves forward with his ruthless extermination tactics, forcing the soldier to take a stand. Enlisting the help of the increasingly embittered Dr Augustine, along with fellow Avatar participant Norm Spellman (Joel David Moore) and pilot Trudy Chacon (Michelle Rodriguez), Jake brings together all the tribes of Pandora for an epic battle for the fate of the world once and for all.

If you saw Avatar on its initial release in cinemas then it is fair to say that you will know exactly what to expect from Avatar: Special Edition. Just like the original version of the film, it still boasts the best 3D effects to date (and helps to banish from memory the crime against 3D that was the other Avatar movie – The Last Airbender), the visual effects never fail to dazzle and astound, the action sequences are both superb and epic, the acting if virtually faultless and the writing is strong if unoriginal – this is basically Pocahontas transposed to an alien planet. Suffice to say, the film is still brilliant. But what about the much touted extra nine minutes of footage? Well, depending on how observant you are they will either strengthen the story slightly or go by unnoticed altogether. The extra sequences are relatively insubstantial, not really standing out in any significant way, but this is not because they are irrelevant, as is the case with the extended editions of many movies, and rather because they blend so organically into the film as to make them seem as if they were part of the movie the whole time. This additional footage includes a scene in the abandoned school that was referred to but not shown in the original version of the film, an additional action scene involving an aerial hunt of animals on the ground below, a Na’Vi love scene, a scene where the Na’Vi attack and destroy the human bulldozers followed by a scene of the humans inspecting the wreckage, and a scene featuring the death of a prominent Na’Vi character as well as a variety of scenes featuring new animals that were not seen in the original version of the film and a number of extensions to scenes that did feature in the original release of the film. None of this necessarily adds a substantial amount to the film but there is distinct strengthening of the plot with certain story and character developments gaining new insight and the additional pieces of action help to make an already thrilling movie a bit more so. So, the extra footage does add something to the film but may well not be noticed by less observant viewers. Avatar: Special Edition is still a movie going experience to behold and is certainly worth checking out for the opportunity to see the film once again in the medium it was meant to be seen in but there isn’t anything truly special about this extended cut to make it a must see for anyone but the most devoted of fans and those who didn’t get the chance to see the film first time around.