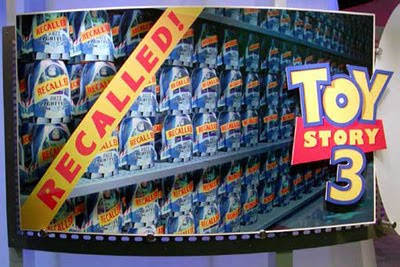 They’ve been talking about making it for ten years and you could easily be forgiven for having started to think it was never going to happen but now, after what is without a doubt one of the longest gaps between family movie sequels ever, Toy Story 3 has finally made it to the big screen. And, as you would expect, it is one of 2010’s most eagerly anticipated movies. From this critic’s perspective, however, it is somewhat harder to get excited about a Pixar sequel (the coming years are also seeing the release of both Cars 2 and Monsters Inc. 2) than a Pixar original, this film bringing to an end a chain of no less than seven original films devised entirely for the screen. Here’s hoping that Pixar are just taking a sabbatical from producing the original works of art that we have grown accustomed to and not abandoning them altogether. Anyway, back to Toy Story 3, Pixar have pulled off quite a feat in bringing the entire gang back together – and I mean pretty much everyone. John Lasseter is once again one of the architects of the story and screenplay, Toy Story 2 co-director Lee Unkrich has been given directing duties and the whole original core voice cast (aside from Jim Varney – the original voice of Slinky Dog – who sadly passed away in 2000) has returned to add their unique personalities to both the toy and human characters. And, if that wasn’t enough, a whole load of other great actors are lending their voices to this sequel, with a whole range of classic toys making their Toy Story appearance for the first time. Toy Story 3 has a lot of hype and anticipation to live up to and, unlike a certain other animated sequel in cinemas right now, it actually does live up to expectations.

Andy Davis (voiced by John Morris) is now 17 and ready to head off to college, leaving his once beloved but now never played with toys Woody (voiced by Tom Hanks), Buzz (voiced by Tim Allen), Jessie (voiced by Joan Cusack), Mr. Potato Head (voiced by Don Rickles), Mrs. Potato Head (voiced by Estelle Harris), Rex (voiced by Wallace Shawn), Hamm (voiced by John Ratzenberger), Slinky (voiced by Blake Clark), the Aliens (voiced by Jeff Pidgeon) and Barbie (voiced by Jodi Benson) to ponder their uncertain futures. When Andy’s Mom (voiced by Laurie Metcalf) accidentally donates the toys to the Sunnyside Daycare center they’re initially overjoyed to once again be played with, but their enthusiasm quickly gives way to horror as they discover the true nature of the establishment under the rule of the deceptively welcoming Lotso Bear (voiced by Ned Beatty) and his ruthless commanders Ken (voiced by Michael Keaton) and Big Baby, along with an army of toys under their command. Now, all of the toys must band together in one final, crazy scheme to escape their confines and return home to Andy before he leaves for college.

I will get this out of the way first – Toy Story 3 is far from being one of Pixar’s very best films. This, however, is more a testament to the continued outstanding quality that they deliver than any kind of criticism of this film. Viewed on its own terms, Pixar’s latest is another superb piece of work and this is true whether you see it in 3D or 2D. The 3D on display here is not as good as in Pixar’s last feature but nonetheless really adds to the viewing experience, not used as a gimmick even once, rather to add depth and dimension to proceedings. This works particularly well with the toys because the artificial nature of them means that the 3D is much easier to render than it is with human characters. The best examples of 3D here come in the more action packed sequences, in particular the stunning and thrilling opening sequence with a young Andy playing a game of cowboys, runaway trains, villainous pigs, atomic monkeys (you will understand when you see the film) and heroic spacemen. The extra dimension not only makes the sequence more thrilling but adds a greater sense of peril. This is followed by a montage of video camera style footage – set to the tune of the Toy Story franchise’s trademark song You’ve Got A Friend In Me – which is notably not in 3D, something that is realistic considering such footage would not be in 3D in real life. As I have stated, the film is fantastic whether you see it in 3D or not and if you opt to see the 2D version there is still plenty to laud here. The animation delivers at the same high standard we have come to expect from Pixar but this is a given from any feature they make. The real heart of the film comes from the writing with the script superbly combining a story that is packed full of truthfulness and honesty – the story is basically one about growing up and it is great that the film reflects the amount of time that has elapsed in real life since Toy Story 2 was made – fantastic dialogue and wonderful characters – the influx of new toys allows for a wide range of vibrant new characters and the film is extremely inventive in the personalities awarded to the different toys, this creativity being what sets Pixar apart from certain other animation studios – not to mention lots of sharp humour offering something for all viewers whether young or old – some lines and gags are aimed squarely at older moviegoers, ensuring that accompanying parents will have just as much fun as the kids, there also being plenty to keep the kids amused too – and plenty of emotion to complement the humour, this being a sometimes sad tale and one that everyone will be able to relate to in some way – everyone grows up after all, as exemplified by Andy who is now a somewhat moody teenager as opposed to the innocent child seen in the previous films. If the film really surprises in any way, it is that is has a somewhat dark edge, with the day care centre turning out to the toy equivalent to an impenetrable prison or a military dictatorship. This is only an observation though and not a criticism and the film gracefully avoids being too scary for younger viewers. Another major strong point on display in the film is, of course, the voice acting and the entire cast – which includes a lot of big name stars including, in addition to those aforementioned in the plot summary, Timothy Dalton, Whoopi Goldberg, Bonnie Hunt, Jeff Garlin and Richard Kind – is pitch perfect without a weak link to be found them and the only criticism that could be raised being that some of them don’t feature more. Anyway, Toy Story 3 is yet another exceptional animated effort from Pixar and if they deliver this standard with their other upcoming sequels we should be in for a real treat.