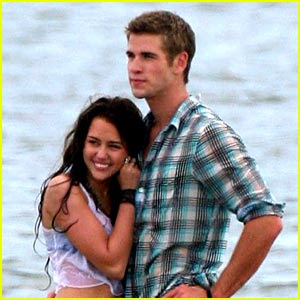 You (don’t) wait ages for a movie adaptation of a Nicholas Sparks novel, then two come in the space of a fortnight – firstly, the somewhat inexplicably popular Dear John starring Channing Tatum and Amanda Seyfried, and now The Last Song starring Miley Cyrus and (if rumours are to be believed, Miley Cyrus’ real life future husband) Liam Hemsworth. Based on what I have said thus far you will probably already know whether or not The Last Song is actually a film for you. After all, Miley Cyrus is one of those stars who you either love or hate and the same could be said of the literary works of Nicholas Sparks and subsequent cinematic adaptations of his works. Some will likely not be encouraged by the presence of director Julie Anne Robinson, in her cinematic directorial debut, either, her past television credits seeing her starting out doing episodes of Doctors and Holby City although she has worked herself up to doing episodes of Grey’s Anatomy and Pushing Daisies. For this latest Sparks adaptation, however, there is something a bit different that sets it apart from previous efforts to bring his work to the screen in that Sparks himself is co-writer of the screenplay. This, at the very least, should ensure an adaptation that will be appreciated by fans of the novel upon which the film is based.

After his messy divorce from Kim (Kelly Preston), Steve Miller (Greg Kinnear) has made a new life for himself in a small beach town in Georgia. His teenage daughter Ronnie (Miley Cyrus) and her younger brother Jonah (Bobby Coleman) stayed with their mother in New York, but Steve has hopes for new beginnings when they come to spend summer with him. Things go well with Jonah from the start but less so with Ronnie. Steve tries to reconnect with his reluctant daughter through the only thing they have in common – their shared love of music – but initially finds his attempts at forming a connection failing. However, everything begins to change when Ronnie meets a handsome local boy named Will (Liam Hemsworth) and romance develops between the two. As Ronnie spends more time with Will she finds herself falling in love for the first time, getting closer to her father and returning to long lost musical passion but soon secrets being kept by both her father and her new found love threaten to destroy her happiness, as things turn out not to be quite as perfect as they appear.

Comparisons between The Last Song and the two week old Dear John are inevitable and obvious – they share similar story elements (boy on holiday meeting and falling for girl is replaced by girl on holiday meeting and falling for boy) and themes (the issue of cancer features once again) and are set in similar locations – but, largely thanks to a lead who can actually act, The Last Song proves to be the superior of the two. Enjoyment (or lack thereof, as may be the case with some people) of the film, though, will of course depend on your personal opinion of star Miley Cyrus. If you are a Miley hater then obviously you won’t think much of this film. If, however, you are like this critic in considering Cyrus to be a very talented individual, you may well love this film. Being someone who appreciates Miley Cyrus as an actress (and as a singer, although that isn’t particularly relevant here, only one song by her featuring and then at the very end of the film), this of course means that my review is coming from the perspective of liking her. While I admit that she probably wasn’t the best choice for the leading role in this film, she proves pretty convincing and shows that she really is more than just Hannah Montana, managing to capture all the emotions necessary in her character convincingly, doing the moody teenager thing pretty well and believably transforming, as the film progresses, into a more upbeat and open personality as her character is revealed to be kind and caring and then reacting to tragic events with a good level of emotional resonance. The latter aspect isn’t quite perfect but she does show that she is a very capable actress and she is certainly far better than Channing Tatum was in Dear John. Even those who don’t like her have to admit that she is a much more capable actor than him. It isn’t just Cyrus who delivers a strong performance here either. While no one exactly stands out or anything, most of the cast member delivers at least a decent standard and her co-star Liam Hemsworth in particular proves to be quite a charismatic individual. As matching ups go Miley Cyrus and Liam Hemsworth don’t seem like an ideal match – in fact they seem like quite an odd match – but it actually kind of works, with their chemistry being suitably charming and very convincing (although it may help that they are together in real life). Many of the interpersonal relationships between the characters are also pretty convincing with Greg Kinnear sharing a pretty good father-daughter dynamic with Cyrus and Bobby Coleman also being very likable and believable as the third part of the father-daughter-son dynamic. It also helps that many of the characters are relatable, particularly Ronnie and Jonah, whose situation has undoubtedly been experienced by many children of divorced or separated parents in real life. This creates characters who more emotion can be invested in. As with any adaptation of a Nicholas Sparks novel, however, the film is far from perfect, even if it does gain a bit from actually having Sparks onboard as co-writer of the screenplay this time round. The story is pretty predictable, with some of the turns late on being less surprising than those in Dear John and just as with that film there is little in the way of memorable dialogue. Also, while the film deals with some very sensitive real world issues, reflecting the not always perfect nature of real life and in a very sensitive fashion, it lacks some of the deeper themes of that other film. Nonetheless, though, while the story is extremely predictable and not especially memorable (at least to those who don’t enjoy a basic romantic tale), most of the target audience won’t really care as the love story at the heart of the film is sweet, touching – with a few scenes that might bring a few tears to your eyes, something Dear John was greatly lacking – and charming, and brought to life thanks to characters that may not be expertly written but are pretty well performed. Direction from Julie Ann Robinson is nothing to shout about but given her television only resume the film at least feels like a movie rather than something that has been made for television. It lacks some of the cinematic invention of Dear John, though, which gained from a more experienced director in the form of Lasse Hallström. Overall, younger Hannah Montana fans may be a bit bored due to the slow pace and lack of music (this may be somewhat surpising to some considering the film is called The Last SONG) but those looking for a sweet romantic movie and those who enjoy movie adaptations of Nicholas Sparks novels will likely find much to love here. Obviously, Miley haters won’t agree with much of what I have said (and should probably take two stars off my rating) but those who do like her will likely join with me in hoping that this isn’t The Last Song for Miley Cyrus as here she shows genuine acting talent and with further opportunities to really act she could go on to great things.