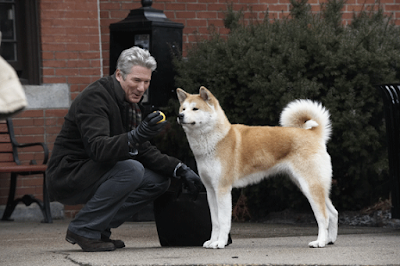 Coming about a year after Marley & Me, not to mention several other canine themed films – dogs were very popular at cinemas early last year – Hachi: A Dog’s Tale is another feelgood family film of the canine variety, albeit one that finds its inspirations in a very different place. While, like ‘Marley’, it still finds its inspirations in a true story, Hachi is actually a remake of 1987 Japanese film Hachikō Monogatari which itself was based on the true story of the faithful Akita Hachikō, remembered for being loyal to his owner, even many years after his owen passed away. Hachikō was given away after his master’s death but repeatedly escaped to return to his master’s old house and, upon realizing that his master was not there, visiting a train station where he had accompanied his master many times before. Hachi 2010, however, is an American adaptation so, obviously, a few liberties have been taken with the story.

Parker Wilson (Richard Gere) finds a lost puppy (Hachi) at his local train station. Not wanting to hand the puppy over to the dog pound, Parker takes it back home with him. Banned by his wife Cate (Joan Allen) from having another dog, Parker hides the dog, who his friend Ken (Cary-Hiroyuki Tagawa) tells him is called Hachiko, Hachi for short, to the best of his ability but due to Hachi’s mischievous behaviour Cate soon finds out. No one comes forward to claim Hachi and he and Parker become so inseparable that Cate cannot help but accept the mystery puppy into their family, which also includes their daughter Andy (Sarah Roemer) and her husband Carl (Jason Alexander). Each morning Hachi accompanies Parker to the station and faithfully returns to greet his master each evening at exactly the same time. Through his daily journeys to the station, Hachi becomes a regular fixture of the community and an inspiring symbol of love, friendship and loyalty to all who meet him.

Anyone who has seen past films by director Lasse Hallström will be familiar with his chocolate box filmmaking style, as evidenced in his films (the appropriately titled) Chocolat and Casanova among others. This same style is present in Hachi: A Dog’s Tale but sadly this film is nowhere near as good as those. Not everyone will agree with this assessment of course, in fact some people will love this film, but the film’s entertainment value is largely equivalent to that of one of the better made Hallmark Movies of the Week rather than a film you would expect to see at the cinema. The storyline, which is pretty faithful to the true story only with events transplanted from Japan to America, is very predictable, not really dramatic enough and not especially interesting to non dog lovers, and often it seems like scenes are loosely stringed together rather than following a well constructed narrative, with the film even dragging a bit at times. Also, the non canine (i.e. human) characters are largely underdeveloped, their lives only being shown fleetingly, although this is probably the point as the protagonist is really Hachi himself rather than Parker. That said the film is not without its charms. The dogs playing Hachi in both his puppy and adult forms are absolutely adorable and you would have to have a heart of stone not to be won over by them. For all its flaws, the story about the unwavering loyalty of man’s best friend is still very sweet, touching and sentimental, and the tragic direction in which the tale goes is sure to bring you to tears. While the roles offer little that is substantial to work with all the cast members do a decent job and while the film is mostly quite basic in the visuals department there are some moments of genuine beauty and the black and white/colour drained dog point of view shots are quite a nice touch. Overall, these things are not really enough to overlook the fact that Hachi: A Dog’s Tale is not that special or memorable a film, seeming more like something made for television than cinema viewing, but its warm message still makes it worth checking. Unless you’re a dog lover, though, don’t expect too much.