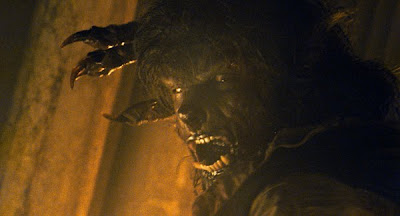 From the director of the pointless trequel to Jurassic Park comes The Wolfman. Yes, Joe Johnston took over from first choice Mark Romanek who dropped out due to budget and the film being crap. Johnston was chosen because he stupidly agreed to complete the film on budget.

Was it a good idea?

Set in Victorian times, Lawrence Talbot, an actor living in America finds out his brother has gone missing. His brother‘s missus (Emily Blunt) is unhappy obviously. Lawrence’s dad (Sir Anthony Hopkins) breaks the news that an unknown beast had killed him. Desperate to discover what happened, Lawrence embarks on a journey to the forest at night where he is attacked by the same beast that killed his brother.

The CGI-animated Wolfman zips about too, too quickly and that movement was unnatural and the so called love story between Lawrence (Benicio Del Toro) and Blunt’s character doesn’t really work. The chemistry is lacking, and it looked like the actual love story arc was edited out.

On the good side though, Johnston has kept the feel of the film old looking, going back to the 40s original. Make-up maestro Rick Baker does his best work for years to create The Wolfman.

But, Del Toro is given little time to establish any chemistry with Blunt, which is a shame as they are both excellent actors.

So, if you‘re looking for a wonderfully shot, perfectly lit, atmospheric film then The Wolfman does just that.

Other than that, the two Oscar winners, a classic horror monster and $100 million to spend didnt make a good film. It didnt work.