Four words within the film industry probably give the majority of movie lovers a bigger buzz than anything else – ‘A Martin Scorsese Picture.’ Just seeing the words on a gigantic screen at your local cinema can make the hairs on the back of your neck stand on end. Add to that an adapted screenplay from a Dennis Lehane novel – after the brilliant book to screen conversion Mystic River (2003) and equally as good Gone Baby Gone (2007), and you unequivocally have a mouth watering combination.
Few Directors no matter what film they make will give you urgency and excitement more than any other prior to a release. In addition to Scorsese, Spike Lee, Terence Malick, Quentin Tarantino and Clint Eastwood may bring you similar enthusiasm as they do for me. I am literally counting down the days to see one of these masters unveil their work on the big screen, after all there will be no more new releases from Kubrick, Leone and Hitchcock.
Shutter Island is a mental institution for the criminally insane – of the most heinous kind. It is split into three sections – A, B and C. With the latter housing some of the most dangerous people on earth. Federal Marshals Teddy Daniels (DiCaprio) and Chuck Aule (Ruffalo) arrive on the island investigating the disappearance of an inmate but find it increasingly difficult to access files and speak to the necessary people – made possible from Doctors Cawley (Kingsley) and Naehring (Sydow). Teddy begins to experience vivid hallucinations and truly horrifying dreams… But what is going on here ? And is all what it really seems… 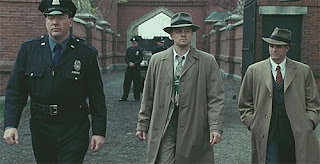 There is no build up – Scorsese grabs you from the opening shot and you are locked in for over 2 hours and 15 minutes… there is no escape for the audience and perhaps no escape for the Federal Marshals either. Scorsese opts to chill you psychologically with a gripping, thought provoking, well lit post war stylish approach to film noir. The screenplay from Laeta Kalogridis enhances this, with some considerable amount of bizarre dialogue for dramatic effect along with some seriously intense acting by DiCaprio – on his fourth instalment with Scorsese. He is yet to top his finest work to date though, as American icon Howard Hughes in The Aviator (2004).
Even someone who is considered by some the best Director alive will not get it right all the time. Mark Ruffalo is a fine actor – What Doesn’t Kill you (2008) and Reservation Road (2007) is full proof of that. However his character here doesn’t allow him to act as there is not enough depth to him – perhaps for good reason – but still, this is a little disappointing. CGI (I’m almost certain) is used for the ocean in the opening sequence while Teddy and Chuck are on the boat, which considering this is a Scorsese film is most peculiar and it may leave you feeling a little ‘ripped off’. In terms of the story, you do get the feeling your being ‘led up the garden path’, so the outcome is definitely not the surprise it is attempting to be – however this is rescued with a nice touch just before the credits begin to roll.
Sergio Leone was the master of extreme close-ups but Scorsese must use more in this movie than the entirety of Leone’s filmography ! Certainly used to ramp up the tension and create paranoia in the mind of the viewer. Michael Mann is perhaps the only other director who can elevate anxiety and fear out from the mind of one of his characters into the mind of the audience – but Scorsese is the master of it. Think Cape Fear (1991) was his great thriller ? Wait till you see Shutter Island.
Warning : There are countless shots and scenes of dead children, which some viewers – particularly parents, will ultimately find disturbing…. But this is precisely what Scorsese is aiming for.
Rating 4 / 5 stars.