Recast For The Twilight Saga: Eclipse 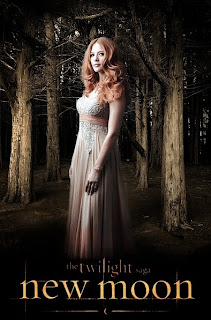 The fangs come off and the claws come out
Shocking news for Twilighters!

Rachelle Lefevre who plays Victoria in Twilight, New Moon has been cut from Eclipse (which sadly she has her biggest part in) she will be replaced by Bryce Dallas Howard (Terminator Salvation). This news will no doubt shock and anger fans that would have wanted a consistent line up of stars for the saga.

Here is how it all went down according to uk.eonline.com it makes for some interesting reading.
Earlier today, the deposed Rachelle Lefevre revealed that she was “stunned” and “greatly saddened” by Summit Entertaniment’s decision to recast Bryce Dallas Howard in the role of villainous Victoria in The Twilight Saga: Eclipse.
And now Summit has fired back, saying the Canadian actress failed to inform the studio until July 20 that she was planning to be in Europe shooting an indie film when the Twilight gang was convening for rehearsals.
“We at Summit Entertainment are disappointed by Rachelle Lefevre’s recent comments which attempt to make her career choices the fault of the Studio,” reads a statement released by Summit late Wednesday.
“Her decision to discuss her version of the scheduling challenges publicly has forced the Studio to set the record straight and correct the facts.”
“It was not until July 20th that Summit was first informed of Ms. Lefevre’s commitment to Barney’s Version, a commitment we have since been advised she accepted in early June,” the statement continued. “Summit had acted in good faith that she would be available to fulfill her obligations both in terms of rehearsals and shooting availability for The Twilight Saga: Eclipse. We feel that her choice to withhold her scheduling conflict information from us can be viewed as a lack of cooperative spirit which affected the entire production.”
Lefevre, who appears in the second installment of the franchise, New Moon, said today that she only needed 10 days off to work on Barney’s Version.
“Never did I fathom I would lose the role over a 10-day overlap,” she said.
Believe us, neither did Twilight fans, who, despite Howard’s decent thespian pedigree (not to mention her pale visage and fiery red hair) are up in arms over the casting switcheroo. And, sure enough, there’s an online petition to get Lefevre reinstated.But Summit maintains that Lefevre left ’em high and dry in their hour of need. Or was going to, anyway
.
What are your opinions on the cast change half way through the saga?