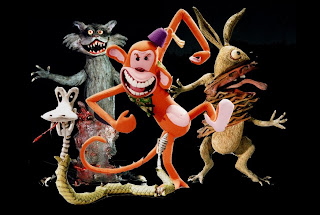 Henry Selick is the director of The Nightmare Before Christmas, a truly classic film, with excellent songs, story, delicious animation and style. From moderate success and a gradually expanding cult following it’s gone on to become a genuine Christmas favourite and has provided clothing for emos up and down the country. Nightmare was the first full length stop motion film to be produced by one of the major studios. Selick’s follow-up was an adaptation of Roald Dahl’s James and the Giant Peach, combining some live-action with stop-motion it captured the dark and imaginative world of Dahl’s writing vividly and though the songs – by Randy Newman – sat uneasily (padding out the book’s thin plot) the film was critically well-received, but something of a box office dissapointment.

For his next project Selick would expand his use of live-action even further, and as a result created his most critically derided and biggest box office loss to date. Monkeybone was inspired by the graphic novel Dark Town by Kaja Blackley and adapted by Sam Hamm, who had written Tim Burton’s Batman movies and an unproduced script of Watchmen for Joel Silver. The film version tells the tale of Stu Miley (Brendan Fraser), an off-beat cartoonist who finds his anarchic creation Monkeybone becoming increasingly popular, his agent Herb (Kids in the Hall alumnus Dave Foley) is eager to market the character for all he’s worth but Stu is reluctant and eager to propose to his girlfriend – and sleep researcher – Julie. However Stu becomes involved – via a giant inflatable Monkeybone – in a car crash and falls into a coma. He soon discovers than when you’re comatose you wind up in a place called Downtown, a strange Coney Island-like part of the afterlife, inhabited by a series of strange, absurd and oddball creatures, along with other comatose people awaiting their passage to the land of death or back to life. Here Stu finds that his creation Monkeybone exists for real (and is voiced by John Turturro, after an originally cast Ben Stiller dropped out) and the little critter finds increasing pleasure in irritating his creator. Ultimately Monkeybone and Stu head into the land of Death (Whoopi Goldberg) to steal an exit pass and get Stu back into the real world.

Now there’s something a little off about Monkeybone from the start, it feels oddly cheap looking for a movie with a budget of $75 million and there are rather a lot of scenes that either appear without explanation or get cut short quite suddenly. There is definitely the whiff of conflicting visions about this movie. Lord knows what the suits at 20th Century Fox were expecting but Selick, on his commentary track, does seem a light dismayed at how people were reacting to his vision. Indeed, throughout the deleted scenes – and some making of footage – you get a glimpse at a slightly purer version of Monkeybone. Brendan Fraser notes*; ‘I don’t know what happened, they gave the keys to the inmates of the asylum. We went nutty and we made a movie. The studio saw it and went, “Huh?”‘

The character of Monkeybone is basically, as the opening cartoon sets up, a euphemism for Stu’s horny side, and there’s a lot of juvenile, but funny, deleted animation of Monkeybone exhibiting his baser urges; in reference to Stu, Monkeybone remarks ‘My castrator… I mean creator.’, this line was ultimately cut from the film, along with shots of Monkeybone making thrusting gestures with his tail acting as his Monkeyboner. Elsewhere footage of Stu in Downtown meeting the ‘cheap and cheerful’ inhabitants was trimmed down as the studio found it too weird, and Selick bemoans how that was the stuff he’d want to see in this film. Indeed, the early poster for Monkeybone was filled with these weird characters and is one of the few film posters that I’ve actually bought. 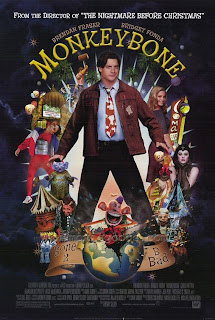 Monkeybone, like Southland Tales, is one of those films I love more for what it could have been, rather than what it is. I like the little hints we get at this grander, weirder vision that Selick envisioned; on the commentary he talks of scenes never filmed where the crummy looking creatures of Downtown enter the ‘dream’ world and become the truly magical, terrifying versions they long to be. We do get a couple of glances into these dream visions and they are some of the film’s visual and comedic high-points, the dog dream being a particular stand-out, followed by a somewhat disturbing deflating Stu nightmare. 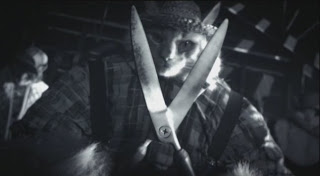 The film ends with Monkeybone betraying Stu, stealing his exit pass and taking over Stu’s life, with Stu then bargaining with Death and being granted a chance to put things right. The good Stu ends up in the body of a recently deceased Olympic gymnast (Chris Kattan) and heads out to confront his evil counterpart. It’s at this point, in the third act, that the film actually manages to hit its stride, balancing its slapstick, purile humour perfectly with a dark, quirky edge. The finale where the reanimated corpse and Stu/Monkeybone fight hanging from a giant Monkeybone balloon flying over the city is wonderful, with the corpse chucking his own internal organs at his rival.

But, it’s not hard to see why this film only grossed $5 million at the U.S. box-office and ended up straight-to-video over here. It is messy, uneven, childish at times, but in that respect it appeals to the rather silly side of me, I can’t help but grin watching Brendan Fraser take off after a stop-motion animated character in a dodgem shouting; “I’ll be right back after I choke my monkey!” Plus, I just love watching stop-motion animation, even if it is as sparingly used as it is here.

Fortunately beyond Monkeybone Selick got his mojo back, providing the beautiful undersea creatures for Wes Anderson’s The Life Aquatic and creating the world’s first 3D stop-motion feature film with his adaptation of Neil Gaiman’s Coraline; a film that has proven to be successful both critically and commercially (also, the eagle eyed may have noticed that Coraline’s Other Father sports Monkeybone slippers).