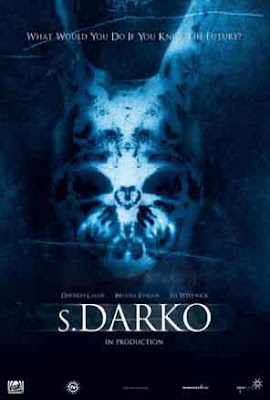 “The Further You Go, The More You See, The Darker It Gets”

Directed by Chris Fisher, S.Darko is the sequel to the cult classic Donnie Darko. A now grown up Daveigh Chase resumes her role as Samantha Darko, along with James Lafferty (Nathan Scott in One Tree Hill), Jackson Rathbone (Jasper Hale in Twilight), and Ed Westwick (Chuck Bass in Gossip Girl).

I am somewhat intrigued to see how it turns out as I like the actors but I am undecided whether to watch it or not because some sequels just should not be made.

The basic plot of the film is it’s set seven years after the death of Donnie Darko, Samantha Darko (Daveigh Chase) embarks on a road trip with best friend Corey played by Briana Evigan (Step Up 2: The Streets) to become a professional dancer. After their car breaks down they wait for it to be fixed, after waiting all night they awake to find a meteorite has destroyed a local farm. Samantha is then plagued by visions much like Donnie was.

After a huge falling out Samantha and Corey become linked and somewhat connected to a missing child. Much like Donnie Darko, sacrifice is needed in order to return the world to order.

Reviews haven’t been good for S.Darko – making a sequel to a cult classic was always going to have a downfall but no doubt the film will gain some kind of following. There is also a new Frank that appears to Samantha and the classic quote “They Made Me Do It” appears again, a link to the films predecessor perhaps?

The trailer for this film doesn’t look as bad as I thought, but as a huge Donnie Darko fan I’m not convinced if I should watch it. I would like to know is anyone is planning to watch it though?

I would have posted the trailer but I’m not technically minded so I don’t know how LOL but it can be found on YouTube or here.

EDIT – Here you go, the trailer.