With the arrival of the trailer for Guy Ritchie’s take on Sir Arthur Conan Doyle’s literary hero Sherlock Holmes I felt it was time for me to blather on about my life long love for the character, but, moreso the 1985 Barry Levinson film Young Sherlock Holmes. 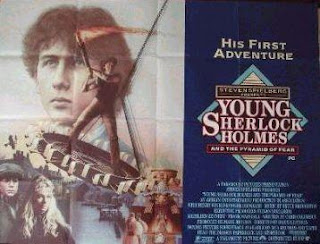 Produced by Steven Spielberg with Henry ‘The Fonz’ Winkler, written by Chris Columbus and directed by the chap responsible for – then – Diner and – since – Good Morning Vietnam, Rain Man and Wag The Dog, though the film was ultimately a relative box-office disappointment. However, unlike many of today’s blockbusters, it decided to be a complete story in and of itself and doesn’t pave the way for further Young Sherlock adventures, instead ending on a rather brilliant post-credits sequence that sets up the books themselves.

The film goes so far as to acknowledge its liberties in a pre-end-credits titlecard that reads;

‘Although Sir Arthur Conan Doyle did not write about the very youthful years of Sherlock Holmes and did establish the initial meeting between Holmes and Dr. Watson as adults, this affectionate speculation about what might have happened has been made with respectful admiration and in tribute to the author and his enduring works.’

This first adventure throws in many of the familiar elements that characterised Holmes in later life, when we first meeting he’s practicing the violin – though is far from mastering it, he takes his deerstalker hat from a deceased friend, his coat from a fallen enemy and the pipe is given to him as a present. Culminating in a final image of the actor Nicholas Rowe looking incredibly Holmesian. 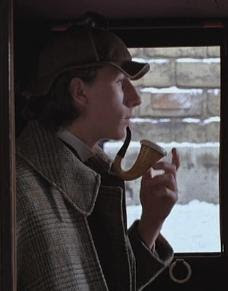 Coincidentally one of Rowe’s latter credits was in Ritchie’s feature-debut Lock, Stock And Two Smoking Barrels, I shan’t hold my breath for a cameo in his latest effort though. Meanwhile, Watson is played – with the fashion sense of Harry Potter – by Alan Cox, son of legendary British actor Brian Cox. Whilst Sophie Ward takes on the role of Holmes’ love interest Elizabeth.

Cox and Rowe instantly develop an easy and appealing chemistry, and Rowe cuts an impressive figure as both a romantic lead and a swordsman; the film features a truly fantastic final sword fight in and around a frozen shipyard. It is, for me, the controversial romantic subplot that really elevates the film beyond speculative, fun-filled children’s fare. This is a rather dark film, arriving a year after Spielberg’s equally Gothic Indiana Jones And The Temple of Doom there are screaming Egyptians, nightmarish hallucinations and young women being drowned in boiling water. The most dark and surprising aspect though comes at the film’s close where Holmes’ love-interest Elizabeth (already an orphan, living with her Uncle who himself gets murdered!) takes a bullet intended for Holmes; following on from a scene earlier in the film where the school boys are asking ‘What do you want to be when you grow up?’, to which, Holmes replies – staring out the window towards Elizabeth – ‘I never want to be alone.’ The final moment between Elizabeth and Holmes is beautifully played, absolutely heart-breaking, and, for an open-minded fan of Holmes, could go some way to account for his distinct lack of love-interests later in life. It also fills the final sword fight with a real sense of passion and revenge that gets the hairs on the back of the neck tingling.

Elsewhere the film is notable for the first ever fully-CG character in a motion picture, a stained glass knight that leaps from its window and scares the Holy Spirit out of a vicar. This still-impressive visual effect was overseen by – now head of Disney – Steve Lasseter, one of the men responsible for Pixar. There’s also some brilliant stop-motion work when Watson hallucinates an army of pastries force-feeding themselves into him!? In short, the film has absolutely everything a great, family adventure should have; mystery, adventure, comedy, amazing effects, romance, a touch of darkness and a brisk pace.

Downey Jr’s Holmes and Jude Law’s Watson seem almost like an evolution of this more care-free approach to the famous detective, playing with the ideas of Conan Doyle in an exciting, funny and yet faithful fashion. I for one am extremely excited about Guy Ritchie’s take on the resident of Baker Street, and feel that it and this children’s classic, that I rented countless times from Cats video in Redruth, would make the perfect double-bill.

The game is afoot, etc!