Alton Williams
SHARE
In 1979 Margaret Thatcher became the UKs first female prime minister, Michael Jackson began his solo venture into music and Walter Hill got his hands on an awesome novel. From this piece of brutal literature, Hill crafted a work of unprecedented genius good enough to stand alongside its literary counterpart and not behind it; this film was of course The Warriors. A film that doesn’t care it’s a bit camp, doesn’t feel any embarrassment from its often Stilton like dialogue nor does it apologise for its frequent lessons in bad acting but despite all it’s glaring flaws it has a timeless charm. Thirty years later, it still stands up as a superlative piece of entertainment. Caaaaaan yoooooo dig iiiirrrrrrt???!!! 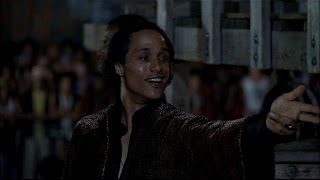 Cyrus, leader of the Gramercy Riffs
Loosely based on the tale Anabasis by the Greek soldier Xenophon, The Warriors pits a collective of Coney Island gang members against hordes of New York boppers as they try to navigate through the streets of the city and return to their home turf. It’s a simple premise, a premise probably written on the back of a napkin but everything just fits. Comic in its narrative and characterisation, there are too many elements of Hill’s landmark effort that simply stick in the mind relenting to let go. Memorable is probably the best word to describe The Warriors, and what says more about the effect of a film than the pure feeling of nostalgia? Right from the off we are submerged into a world of gangs caked in darkness; the intro is arguably the finest intro to any film setting the scene perfectly for the prologue. We are introduced to many gangs, all of many persuasions, all with very questionable evening wear. There are clowns, skaters, a baseball team and bunch of grease monkeys to name but a few. Then we have The Warriors, all kitted out in their gorgeous custom made leather waist coats (presumably crafted by their mothers) led by Cleon, the war chief of the crew and an all round nice guy. All heading to Van Cortlandt Park, each gang is represented by nine to a summit by Cyrus, the leader of the hardest of gangs; the Gramercy Riffs. After a rather rousing speech plotting a unity of all the gangs to overthrow the police, Cyrus takes a bullet in the gut from the Luther, leader of a rival gang; The Rogues. As one would expect, chaos ensues and Luther blames it on The Warriors the little bastard. During the riot, Cleon is brutally, yet somewhat amusingly, beaten to death by the Gramercy Riffs and their armour plated elbows. After escaping, The Warriors find themselves on the other side of town, a man down and fearing for their lives. Thus begins the journey for this eclectic 8 piece and their new war chief; Swan. The Warriors throws us straight in at the deep end and all the better for it. It doesn’t ever try to be over complicated, nor does it attack us with thought provoking insight or a deep political message. As soon as we hear “Nowhere To Run” play over a montage of what lies in wait for the group, we know we’re ready for fights, chases and whatever lies in-between. What you see is what you get, and pretty much all we see is awesomeness defined. Walter Hill’s brief surely said “Entertainment is key, no BS baggage”, a brief he stuck to throughout. Sure you can see the entire crew sitting on the road when the Turnbull ACs chase Swan and co down the street, sure you can hear Walter shout “Action” at the start of Luther’s now iconic bottle clinking scene, sure you can see cameramen and lighting equipment in the park, sure there are continuity errors all the way through the film but its technical prowess is not what makes this film so good. Despite all its shortcomings, and yes there are a few, there’s a distinct charm a lot of movies tend to be void of these days. For one, some of Hill’s shot selection is frankly superb countering any technical hitches we frequently see. Often the lighting exquisitely compliments Hill’s set ups, supporting the notion of fear within the group and their attempt to return to safety, i.e. the daylight. We are consistently treated to visually brilliant shots, all of which encapsulate the gritty reality of the grimy side of 70s New York perfectly. For some reason, despite its undoubted campness caused by costumes, it feels real. 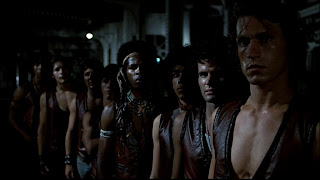 Hill’s shot selection is frequently superb
Supporting such shots of visual panache is the near faultless soundtrack. Barry de Vorzon completes the experience attacking us with retro seventies synth and echoes of John Carpenter. And although scarce, songs from Arnold McCuller, Kenny Vallance and Joe Walsh are perfection when laid over such epic montage moments and satisfying denouements. Each character is individual, not just The Warriors, every gang and its members are unique from aesthetic looks to the way they carry themselves, and considering the sheer number of groups in the film this is an incredible achievement.

Despite being camp, the gangs were all brilliantly varied.
While its faults are there to see, there’s no questioning what Hill does well, he does with a brilliant consistency. He manages his cast well, and despite falling into an occasional realm of cheese, they all complete the experience. From Michael Beck as Swan, who leads the group with a cool head and a hope of redemption to James Remar as Ajax, the fist toting horndog, they all bring uniqueness with differing qualities to compliment their equally likable personas. It’s a shame no one seemed to forge a career after The Warriors. James Remar did play a lightning God and get to bone Kim Cattrall but it’s hardly spellbinding. Some of the cast careers seemed to fall by the wayside into a world of made for TV movies and serial dramas, some chose to embrace other career paths and unfortunately for Marcelino Sanchez (Rembrandt) a premature passing, he died of cancer in 1986. Other minor characters went on to semi success but The Warriors is surely the high point on their respective resumes.

The films narrative essentially sees the posse running from one area to the next, each time stumbling upon rival gangs or the police all vying for their capture. Each scene is broken up by radio broadcasts commentating on their progression home by the sultry spoken Lynne Thigpen. It plays out like a video game, and there was no surprise when in 2005 the developing giant Rockstar added a videogame adaptation to their already impressive roster. Being one of the more successful film to game recreations, its gaming counterpart is a prequel to the films events and contains most of the original cast in events leading up to the film. It’s a stellar effort from Rockstar, and impressed the fans as much as the general gaming public. 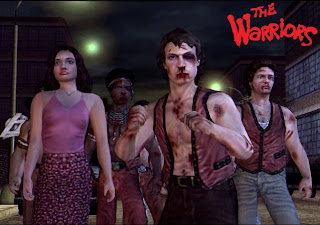 The Warriors game was well received,
getting a very respectible average of 84 (metacritic.com)
The film was never going to win awards, but in terms of cult status it has achieved the highest of accolades. Creating inspiration for fancy dress parties and churning out some of the most memorable lines ever committed to film, The Warriors is easily one of my personal favourites. It doesn’t make me think, nor does it force a message down my throat but what makes The Warriors so memorable, what makes it so good, is its timeless charm. No film gives me the same satisfaction as watching Walter Hill’s fine expression of Greek mythology. Granted I laugh at its shortcomings, but what film is perfect? I’d rather be entertained for 90 minutes cheering at the fight with the Punks, shouting out quotes from Cyrus and chuckling when Ajax offers to insert a bat into a dude’s rear orifice, I’d rather do all this than be bored senseless for 3 hours watching a movie cited as excellent for being a relevant commentary to social issues. Movies are about escapism, and who better to escape with than Swan and his merry band of leather clad men.
Warriors come out to playyyy-eee-yayyy!!!