Alton Williams
SHARE
So it’s that time of year again, as if you need telling. I t’s a time to talk about films, the films we’ve seen and the ones we’re looking forward to.
I was planning on writing about the films up for Best Picture tonight. But there’s already smarter people than yours truly talking about this.

Instead I’m looking to the future. It won’t be long now until Watchmen, Zack Snyder’s adaptation of the classic graphic novel, hits cinemas. Zack Snyder’s doing his best, throwing all the slow mo effects he can muster into the film.

There are some great actors on board, including Jackie Earle Haley as Rorshach. Haley gave a fantastic performance in Little Children, which if you haven’t, you should see by the way. Yes, that’s right, you. 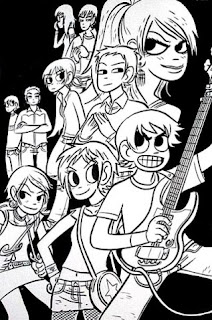 Unfortunately we’ve all seen films of Moore’s work go wrong many times, from V For Vendetta to whatever the hell League Of Extraordinary Gentlemen was meant to be. Then there’s the ending of the book being changed, and the news that My Chemical Romance have done a Bob Dylan cover for the film.
Now I know I’l have to learn to live in a world with My Chemical Romance, but I just can’t do it. So I want to like this film, but just in case I don’t, thank God for Scott Pilgrim.

Starring Michael Cera (Superbad) and directed by Edgar Wright (Shaun of the Dead), Scott Pilgrim Vs The World is a adapted from a series of manga inspired graphic novels that follow our titular hero, a 20 something slacker living in Toronto, whose top priorities in life are to play in his band, ‘Sex Bob-omb’, play videogames and date a cute high school girl. He is described at the beginning as ‘Scott Pilgrim, 23, rating : Awesome’. Everything’s cool and simple until delivery girl Romana Flowers walks into Scott’s life, and his dreams, and turns everything up side down

The movie, which also stars Mary Elizabeth Winstead (Death Proof) and Alison Pill (Milk), is adapted from the series of Canadian graphic novels of the same name, written and drawn by Bryan Lee O’Malley.

The art of the books is inspired by Manga, following Scott as he stumbles through life in the big city, his friends and the girl he falls in love with. Things get a bit more complicated when it turns out Romona can travel through Scott’s dreams via subspace, and to date her he has to fight each of her seven evil exes (it’s a different ex for each book, with six books overall). The books are funny, cool, and become more emotionally complex with each new volume.

It makes perfect sense that Edgar Wright should be directing, after his work on the TV show Spaced, a programme about similiar themes and steeped in popular culture.

Scott Pilgrim, too, is about a group of people whose lives are influenced by the music, films, and video games they like. 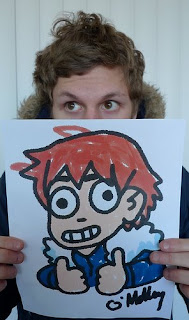 The plot itself is derivative of video game structure.

And like Spaced, the themes at work here are much deeper than it might at first seem. The friendships and group dynamic of the books change and evolve over time, and Scott himself starts to grow up. The themes become more adult and layered, and the fight scenes become less important than the relationships between the characters.’ It’s basically awesome.

This could also be a real chance for Michael Cera to shine. I’m not saying he hasn’t been good in his other work, but Scott’s is a boisterious and over confident character that could be a great departure for Cera. In short, I’m excited about this film. Shooting starts in March so there’s a while to wait, in Scott Pilgrim‘s words you might say “the future…….what like with jet packs?” But it’s worth the wait and until then you could always check out volume one, Scott Pilgrim’s Precious Little Life.
So anyone else got that pre-Christmas type feeling about a new movie coming out? Anyone looking forward to Scott Pilgrim? Turn the page.