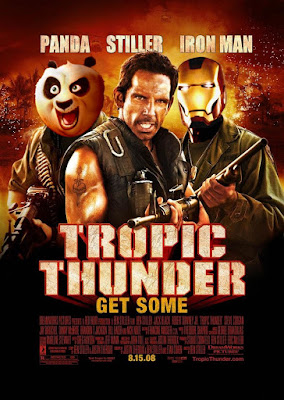 Witnessing the sorry state of over budgeted, over hyped comedy madness, Tropic Thunder hit the screens in late 2008. The feature starts off all well with great fake adverts and trailers for each of the actors involved. I have no problems with this and believe they are the strongest point of the film itself (*Apart from Jack Black).

Soothing the ego’s of those actors involved further, the set up consisted of squeezing in as many names as possible for the cinema audiences. Jack Black, Robert Downey Jr., Jay Baruchel and Brandon T. Jackson play the main characters who the parody is based around.

It turns out that Jack Black is pointless being in it, Downey Jr. is always quality but is ropey in parts but his delivery of dialogue pulls through. Brandon T. Jackson is only in this to overcome racial stereotyping with superstar rapper ‘Alpa Cino’, to cover Downey Jr’s. ‘Kirk Lazarus’ role.

Jay Baruchel is the one who shines as he acts out playing the inexperienced actor in amongst many egos, he excels and gets plenty of screen time. As a parody of larger than life Hollywood actors on an over budgeted set, the cross over mildly works. It is a take on the Vietnam syndrome that is lamented into American history. It draws its style from Apocalypse Now whereby everything ran way over budget and on set was apparently a nightmare due to the demands.

This is what Stiller is showing when the amount of excess the prima donna actors have. Mix that with other classic Stiller projects such as Anchorman (e.g Panda reference), Zoolander (e.g most of the characters) and Dodgeball (more character and plot) you see the pattern emerge.

Technically, the cinematography was impressive and Stiller’s own tried and tested regime of comedy was ever present to keep audience focus. With a super huge budget, it was expected. At some points the film made me angry in the fact that it overcooked some unfunny parts, such as the introduction of the Simple Jack film of Tugg Speedman’s.

This reference was funny for one purpose, the talk he and Kirk Lazarus has about not going ‘full retard’ as an actor, this dialogue is fantastic. Apart from this, it falls on its ass. The script didn’t have much gusto to carry through. The middle of the film fell flat with littered explosions and a ridiculous sub story with Matthew McConaughey for no reason hogs the screen.

The ending was an abomination. Seemingly wrapped up in no less than a minute it falters at the point when there is a last cross over of the parody of Ben Stiller ‘Tugg Speedman’ winning a ludicrously unfunny major Hollywood award to summarise the lacklustre ending. Pitiful.

The film has its fair share of gay bashing. It gets caught with its pants down when it comes to penetrating a negative message that homosexuals are funny. Of course they are I am aware of this, just look at Graham Norton, Dale Winton or Alan Carr (I don’t actually find any of these funny but the point is out there).

Not only did this get my goat, but the casual racial slurs of any Asian gangland criminals annoy the hell out of me. In fact, it was rubbish. Especially seeing the 14 year old leader of the gang on screen really lost my attention span. Sorry kid but you are awful.

The hideousness of seeing Tom Cruise dancing to hip hop. Yiesh! “Oh, its so funny to see a white man dancing to black music.” It ran thin and got old quick. Instead they persisted and finished the film with it.