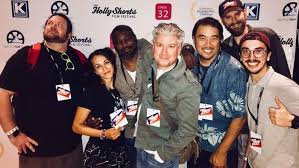 Nathan Pfaff: BRWC Exclusive Interview. Available on demand from today, “Film School Africa” is an insightful and compelling documentary about a Hollywood casting agent who leaves her life behind for a job teaching film in Africa. We spoke to director Nathan Pfaff about it.

How would you describe film school Africa?

Is it a film you’ve been working on for quite a while?

I did the filming in South Africa for three months in the summer of 2016 and then proceeded to edit it by myself for a little over a year. We did the 2018-19 festival circuit and now I am so excited to finally be releasing it online.

Was anything scripted or did it just roll-out originally?

Nothing was scripted at all. Aside from the archival footage Katie had, I simply documented the staff and students of the school doing their film projects. I recorded their interviews towards the end of the trip to be able to get their comments on whatever transpired.

Have you been surprised to discover a certain demographic or segment enjoying the movie that you didn’t expect to?

I figured an older audience might enjoy the inspirational aspects of the film, as well as people in the film industry for obvious reasons. But I would say I’ve seen a younger audience enjoy it more than I expected. A panel of student judges at the Calgary International Film Festival overwhelmingly voiced their appreciation of the film when including it in their youth-focused film series, and that was really encouraging to me.

For you as a director, are there any documentary filmmakers you admire? Any of them inspire any of your directing choices on the movie?

I completely admire documentary filmmaker Jimmy Chin, who produced Free Solo, one of the best documentaries I’ve ever seen. What he did was incredible. I am inspired by Matthew Heinemann as well, who produced Cartel Land and City of Ghosts, for being a filmmaker who also had his hands in each aspect of the production process.

Film School Africa was largely modeled after one of my favorite documentaries called Blood Brother, produced by Steve Hoover and which won the Sundance audience choice award in 2013. Besides being one of my favorite films, I found the stories quite similar in many ways, and drew heavy inspiration from his story structure.

What do you hope the movie does for your career? What do you want out of this?

My desire for making this film was twofold. Obviously I’m excited about the thought of having this feature film open opportunities for me in documentary directing and editing in the future. But I also really wanted to bring greater exposure and support to what Katie is doing with the students in South Africa. I hope shining the light on their story will inspire others to get involved or have the same mindset. I truly believe in what they are doing, and a percentage of all the film’s profits are going directly to the school.