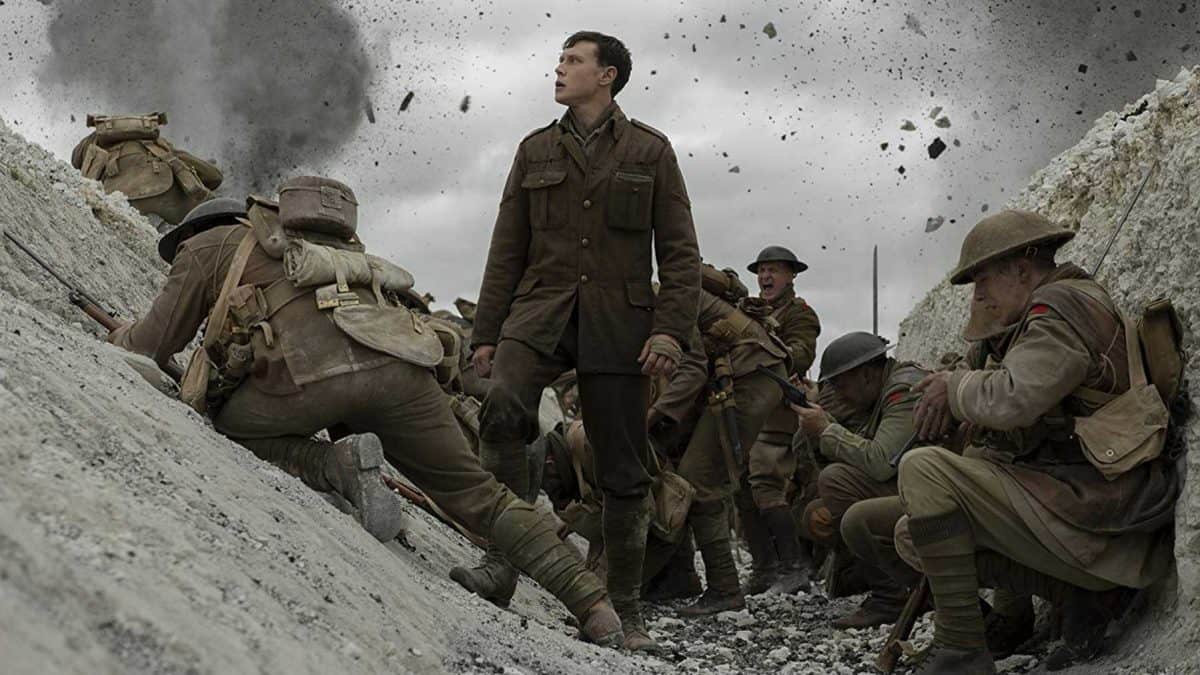 1917 isn’t a gimmick. It’s not Sam Mendes and Roger Deakins deciding that making a film look like one continuous shot would be a fun thing to do. Rather, 1917 is nothing short of a complete tour de force from both sides of the camera, and one of 2019’s absolute best films.

The script is astonishingly Mendes’ first-ever writing credit, and the only reason he wrote it is because of how deeply personal the story is for him. He, along with his writing partner Krysty Wilson-Cairns, based the film on the experiences of his grandfather in The Great War and the stories he told Mendes. This simple fact is why the film is so moving, so personal and impactful.

George MacKay and Dean-Charles Chapman play Lance Corporals Schofield and Blake. Two young British soldiers whom we meet unassumingly as they find what rest they can while fighting on the Western Front. All too soon Blake is ordered to pick a man and report to General Erinmore (Colin Firth) and thanks to being right next to him Schofield is the lucky chosen man. They walk and pass a seemingly endless amount of men, many of whom would charge to their death in days to come.

And, as always in war films, these men and their sacrifice and the needlessness of their mass death is the focus. Once with the general, we find out that in amongst the devastation, Blake and Schofield have the rare opportunity to prevent tragedy and save Blake’s brother. His brother is a member of a company of 1600 men, stationed deep in enemy territory, about to walk into a German trap that would see all of them slaughtered.

With the telephone lines cut, there is only one way to deliver the vital orders to the man that needs to see them, on foot and through no man’s land right on the tail of a retreating German force preparing to sucker punch. Desperate to ensure his brother’s safety, Blake sets off leaving Schofield no choice but to follow.

We follow them for every step of their arduous journey, from the dank trenches to the desolate no man’s land, to the grassy rolling fields of northern France. Each is more breathtaking than the next and filled to the brim with nail-biting tension. There’s nothing quite like the experience of watching 1917 for the first time; you forget to breathe, the camera passes so many horrors the basics of a corpse seem mundane by the end. There’s the eeriest feeling that it’s all a bit too real, and then there’s the harrowing question all World War One films ask, why did the world put itself through all this again years 20 years later? These thoughts and questions flow through your mind as you watch and simply soak everything in, stunned.

Each and every second of this is captured by Deakins who outdoes even himself with the cinematography. The actors are the focal point of almost every shot, and he does them a great service. He captures them on the forefront of disaster in ways no other film has ever done and may never do again for a long time. There are moments where you feel like time has stopped, you aren’t watching anymore; you are there stuck in a moment. No one in the world creates these infinite moments like Deakins. He’s a master of developing the sensation that you’ve entirely handed yourself over to a film and 1917 owes him much for its brilliance.

By comparison, Mendes’ career tells a different story. He misfired with Spectre, his efforts there lacked the thrills of Skyfall and felt incredibly underwhelming at the time. There’s no better way to bounce back than with something as intense as 1917. Above all else, applaud him for his courage. He took 100 million dollars from a studio and set out to shoot, on location, a film designed to look like one continuous shot, set entirely around two young actors who’ve only recently begun to gain exposure at the Hollywood level. He took this impossible ambition and made it something out of this world and deserves his name up there with the likes of Scorsese and Tarantino as one of 2019’s finest directors.

Yet Mendes and Deakins would have nothing if it weren’t for the extreme talents they placed before our eyes. The biggest regret of this awards season is the lack of recognition coming for the two young leads. They are chameleons in their roles, uncovering parts of their range that I can’t wait to see again in different circumstances. In a different year, they could both be frontrunners for Academy Awards, but the powers that be have decided this year isn’t that year. After seeing the film though and soaking in the stunning conclusion, you realise that you have just seen two future superstars take their first steps to the top of the mountain and that’s more exciting than anything else.

1917 is awe-inspiring at every turn and will be immortalised as the moment George Mackay and Dean Charles Chapman made it big on the silver screen.